The third annual Strength of our Women gala celebrated “Indigenous women, the architects of our society,” according to Vice-Chief Heather Bear of the Federation of Indigenous Sovereign Nations (FSIN) and co-chair of Saskatchewan First Nations Women’s Commission (SFNWC). 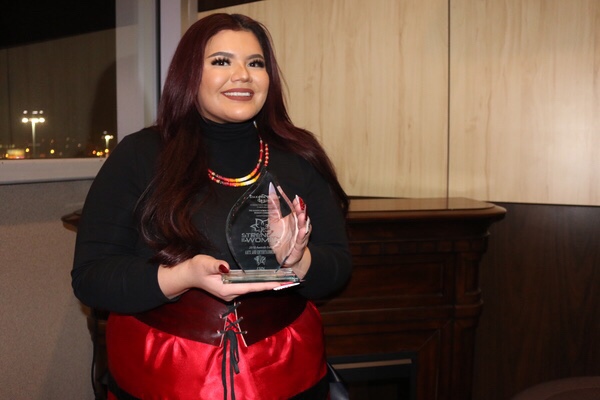 The evening began with the special honouring of Debbie Baptiste, Jade Tootoosis, and Eleanore Sunchild for their hard work, tears, love, compassion, empowerment, and advocacy in the wake of Colten Boushie’s death. Colten’s mother, Debbie, asked her niece Jade to read her notes on her behalf.

“We are very thankful and grateful for all the people who have prayed and supported our family,” she read, listing many supporters. “Thank you to the community and the people that continue to stand with us.”

Baptiste also congratulated all the women present for their resilience and example.

Special recognition was also given to the founding mothers of the Ocean Man First Nation, who together as a team advocated and negotiated to have appropriated land returned in the 1980’s: the late Chief Laura Big Eagle, Late Councillor Lucille “Luxy” Big Eagle, Adella Ewack, and Marion Standingready.

“Women in our communities are so important, they bring life, everything that I learned was from my mom,” said Antoine-Tootoosis afterwards. “All the women who raised me made me so strong, and I’m just honoured.” 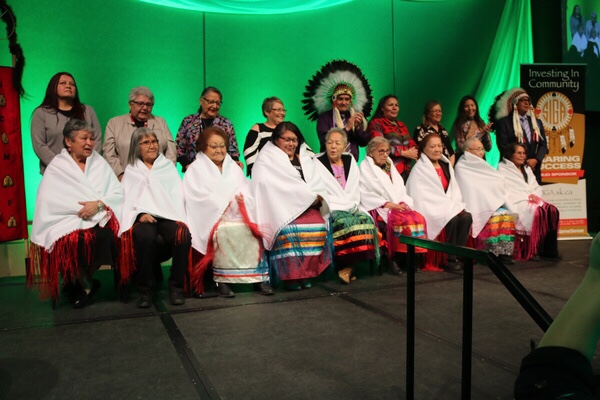 Winners (seated) of the Matriarch Awards.

Nancy Lafleur received the Education Award, with a field of nominees including Lillian Fineblanket, Stella Merasty, and Audrey MacDonald.

Lifetime Achievement nominees were Carrie Marion, and Marlene Buglar who was the recipient. Buglar was recognized for contributions to social work which began over 30 years ago as Executive Director of Kanaweyimik Child and Family Services in the Red Pheasant, Mosquito, Moosomin, Saulteaux, and Sweetgrass First Nations. Buglar went on to the provincial government, was the lead negotiator for Jordan’s Principle, and created partnerships between the Ministry and First Nations Child and Family Service agencies. Moving to national work, she prepared a review and report which was evidence in Human Rights Tribunal hearings to increase funding for First Nations child welfare programs. She has also presented to the Supreme Court of Canada.

Proceeds from the event go towards the SFNWC whose stated primary purpose is to assist the families of missing and murdered Indigenous women and girls.