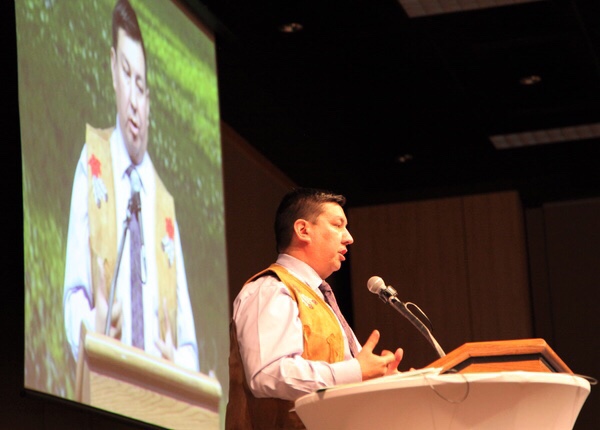 Energy professionals from across Canada gathered at the 4th Annual Indigenous Green Energy Forum to discuss the logistics of a renewable future and the launch of a brand-new scholarship for students.

On November 21st, the First Nations Power Authority (FNPA) hosted the event at Saskatoon’s TCU Place, which brought Indigenous interests to the centre of energy-related dialogue.

A grand entry kicked off the forum followed with introductory remarks by energy-officials and Indigenous leaders.

There were breakout sessions to educate Indigenous peoples in alternative energy and an overview of financing Indigenous-led projects provided an opportunity for community members of FNPA to network with experts. Many community members and leaders inquired about projects of their own.

Lonechild spoke to a room-full about the importance of projects that benefit Indigenous communities directly.

“Increasingly, Indigenous stakeholders are well positioned to be very significant partners in developing and delivering major renewable projects,” said Lonechild who added that FNPA always does their best to profile best practices in partnership development, successful implementation strategies, and to provide strategic context for its participants.

The president of SaskPower, Mike Marsh, attended and acknowledged an existing relationship between FNPA since 2010. When he spoke about the renewable future, he said, “We’ve been blessed in this province with fossil fuels, with natural gas, and with coal. But as regulations change, and as societal pressure begins to move industry away from carbon-emitting sources of energy, we have to clean up our emission, and that means integrating more renewables into our electricity grid.”

Representatives spoke on “SaskPower’s Strategic Direction Toward 2030” during a presentation which includes their on-going relationship with FNPA.

‘Financing Renewable Energy’ panelist and Harvard business scholar, Meagan Hill, sat with others to answer questions about the logistics on securing funding. She said there are often misunderstandings between financial providers and the First Nations.

“I think First Nations communities should invest in learning about the various industry players in the renewable energy space,” she said.

The panel was simultaneous with another on educational facilities, like the Northern Alberta Institute of Technology, that can train Indigenous alternative energy specialists. Financing renewable energy and employing energy-trained Indigenous peoples is a barrier to asserting control over Indigenous-produced energy.

“FNPA launched the Pathway to Powerful Opportunities Scholarship Fund for the first time at this year’s Forum Gala,” said Lonechild.

The organization understands it has a major role to encourage young people to take-up renewable energy.