Sixties Scoop survivors receive apology from the Province of Saskatchewan

Four years later, a long-awaited apology to the survivors of the Sixties Scoop was finally given by the Saskatchewan Premier Scott Moe. Four years after former Premier Brad Wall said an apology would be issued, the historical moment happened. On January 7th an apology was made to acknowledge the survivors and the impact that the Sixties Scoop has made.

“It is difficult for most of us to comprehend what the individuals of the Sixties Scoop went through.

I certainly can’t pretend to know. But I do know this…We failed the survivors we heard from in the sharing circles, and so many others. We failed their families. We failed their communities. We failed. On behalf of the Government of Saskatchewan, on behalf of the people of Saskatchewan, I stand before you to apologize to say sorry,” said Premier Moe. “We are sorry for the pain and sadness you experienced. We are sorry for the loss of culture and language. To all those who lost contact with their family, we are so sorry. There is nothing we can offer that will fully restore what you have lost. What we can offer is the solemn assurance that government policies have changed. And they continue to change.”

The apology took place at the Saskatchewan Legislative Building where hundreds of people gathered. Inside the Rotunda, there were two chairs covered with a blanket in the front row that were placed for the Sixties Scoop children who died before an apology was issued. The chairs signified the mothers and families whose children were taken and never lived to hear the apology.

Robert Doucette, a Sixties Scoop survivor and the former President of the Metis Nation – Saskatchewan (MN-S), said the apology was a step forward.

“We need to start somewhere. We could continue this never-ending dialogue about all of the things that we have faced but now we have engaged this province in this discussion. Not only amongst First Nations and Metis but non-Aboriginals,” said Doucette. “I think this apology sends a message across this province that we need to have that dialogue, we need to show empathy for each other and we need to do things in a different way. Without this apology and the acknowledgement of what has happened, we wouldn’t be engaging in a dialogue. Is the work completed? No, it’s just beginning. You can be rest assured that Sixties Scoop Indigenous Society and Sixties Scoop survivors across this province are not going to let this issue go away. There’s too much at stake.” 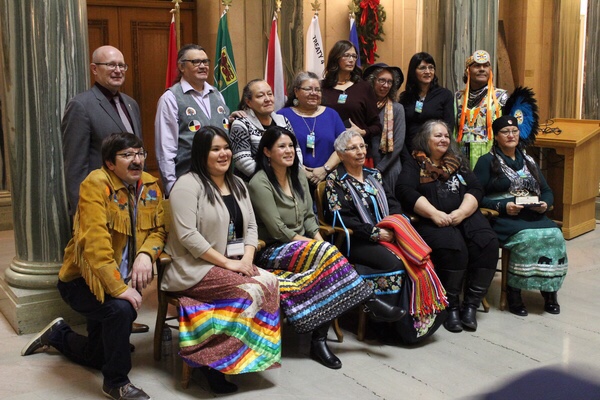 AFN National Chief Perry Bellegarde was not in attendance but acknowledged Premier Moe’s apology on his social media.

“Premier Scott Moe formally apologized on behalf of the Saskatchewan government for its role in the Sixties Scoop. While this is a welcome first step toward reconciliation, First Nations look forward to seeing concrete action from the government of Saskatchewan that will help ensure First Nations children are protected and able to be successful in life. We can’t let this happen again,” stated AFN National Chief Perry Bellegarde in a Facebook post.

The Federation of Sovereign Indigenous Nations (FSIN) Executive was also not in attendance at the apology event but acknowledged the provincial apology through a media release and a call for an immediate moratorium on provincial adoptions involving First Nations children.

“The apology is welcomed, however, there must be action along with these words. That means immediate and serious change as this is First Nations jurisdiction,” stated FSIN Chief Bobby Cameron in a media release. “Our First Nations children are still being ripped away from their families, communities and culture. This needs to stop immediately. This apology is empty if it is not followed through with action.”

FSIN Vice Chief David Pratt added the apology is a good start but the government must end the apprehension of Indigenous children and immediately cease adoptions of First Nations children into non-First Nations homes.

“The current system continues to fail our children and we require immediate reforms that will place jurisdiction and accountability into our First Nations communities,” stated Chief Pratt. “This is what is desperately needed to begin the healing process and bring our families back together, while repairing the damage that has been done by the child welfare system.”

The Sixties Scoop refers to a period in Canadian history when Indigenous children were removed from their families and their communities by child welfare services. Thousands of First Nations, Métis and Inuit children were placed in non-Indigenous foster and adoptive homes in Saskatchewan.