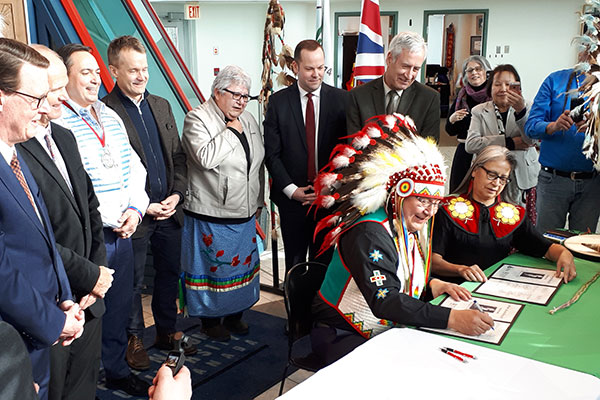 Star Blanket Cree Nation Chief Michael Starr along with other signatories signed documents that completed the process that began in 2002.

Leaders and dignitaries carried in the flag staff and walked in a grand entry with singers from Star Blanket Cree Nation called Red Dog Singers who kicked off the event. FNUniv President Mark Dockstator was the Master of Ceremonies who introduced all the valuable guest speakers. Minister of Indigenous Services Seamus O’Regan gifted Chief Starr with a picture to commemorate the historic day and the efforts of making the territory urban reserve land.

“It’s a tremendous significance not only here in Saskatchewan but right across the country as an Indigenous university that is run by Indigenous people themselves and the only one on reserve land,” said Minister O’Regan. “It means a lot to people.”

“Working with [FNUniv we’re] possibly looking at some economic development into the future,” said Chief Starr. “But that work has to be together. We will work together in a good way to find those solutions to help our people.”

The FNUniv institution was gifted with a headdress of the last hereditary chief named Red Dog. It will be kept on display within the university to honour the gift. Star blankets were also gifted to the dignitaries who helped make the signing ceremony a success. A community feast ended the signing ceremony. 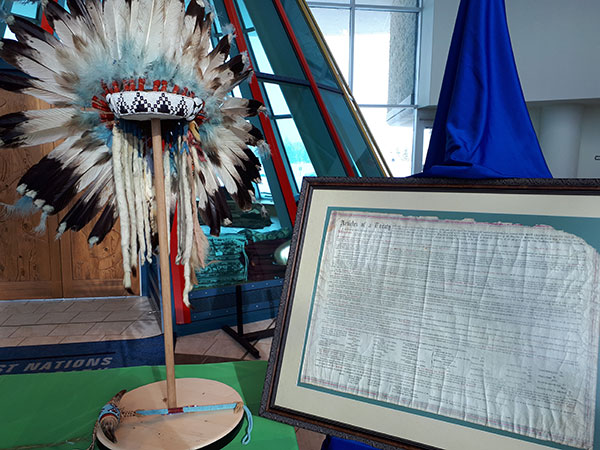 FNUniv was gifted with a headdress of the last hereditary chief named Red Dog. It will be kept on display at the university to honour the prestigious gift. Jeanelle Mandes