New book embraces a Kokum’s spirit in a young woman

Some people may say it’s not a traditional combination, but Tala Tootoosis has never claimed to be traditional.

“I would rather be real and authentic,” said the newly published author of The Awakening of the Kokum Spirit in a Young Woman. 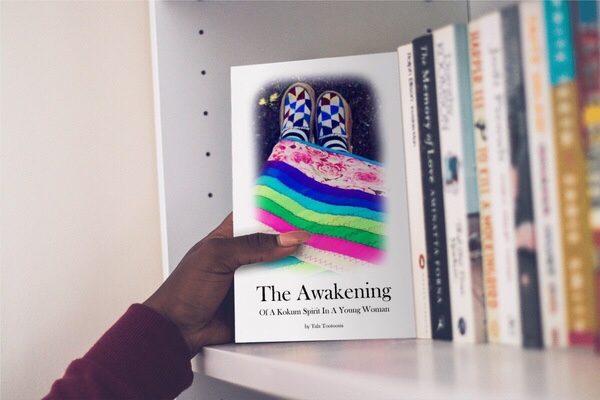 The book is a compilation of her spoken word poetry, blog posts, along with some of her favourite images.

“I wanted to create something that wouldn’t take too long to read, but would contain some teachings,” said Tootoosis.

It was a labour of love and she couldn’t be happier with the finished product.

“I look at it and I still can’t believe that’s me,” Tootoosis said about the book. “Everytime I’m asked to sign one it brings tears to me eyes. It’s so humbling.”

For the past few years, she has been active on social media blogging about rape culture, sexual assault, addiction, colonization and residential schools as a way to raise awareness about how these things have, and continue to, impact Indigenous women.

Tootoosis didn’t realize until she was in university that she had a talent for spoken-word poetry.

She recalled struggling in an Indigenous Studies class because she couldn’t connect with the instructor.

“There was this white woman standing there, in front of me, trying to teach me about my people,” said Tootoosis. “I was biased and I wasn’t doing the assignments.”

That’s when she had a talk with her friend Zoey Roy, an established spoken word poet.

“She told me to write it down, write everything I was feeling, so I did,” said Tootoosis.

That is when she created the poem Doubts, Thoughts and Goals, which she has performed several times to rave reviews.

Since then, Tootoosis has continued to write and share her thoughts, doubts and goals on Facebook, which caught the attention of Jason Eaglespeaker from Eaglespeaker Publishing.

“Our descendants are our true audience,” he said. “What will they know of our lives? What stories will we tell them? What struggles will we reveal to them? We owe it to our descendants to express ourselves - fully and completely.”

Eaglespeaker said Tootoosis’s story is medicine; and it has the power to heal.

Last fall, the pair began working on the book.

When she is able, Tootoosis plans to host an official launch in Saskatoon, but until then, the book is available online at Amazon.ca.

In the meantime, she will continue to blog, host ribbon skirt workshops, expand the Kokum Scarf Campaign, as well as, work and be a full-time mom.

Future goals include obtaining a Masters in Social Work, writing her autobiography and one day opening a treatment centre where those with addictions can be treated with ceremony and traditional medicines.

Ultimately, she just wants to be like the kokums she had growing up,

“I will wear a ribbon skirt, quill, make really good bannock, give good advice, except I will have tattoos and listen to Tupac,” said Tootoosis.