Okanese First Nation Chief Marie-Anne Day Walker-Pelletier  received a prestigious recognition as a Member of the Order of Canada. This is a major accomplishment in recognition of her life-long commitment to leadership of her nation as she is the longest consecutive term serving as chief in Canada. 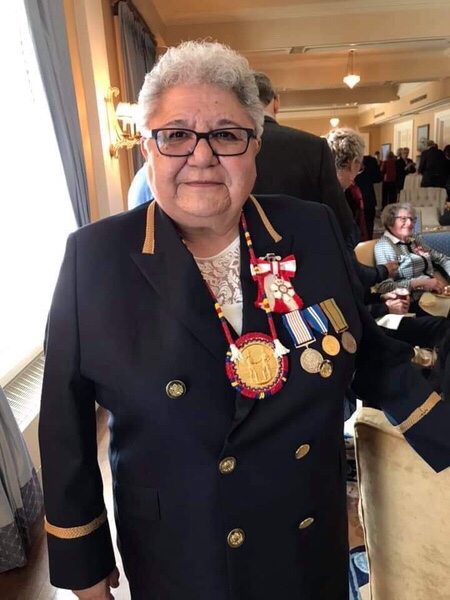 The Federation of Sovereign Indigenous Nations (FSIN) Executive extended their congratulations for receiving the prestigious Order of Canada.

“Chief Day Walker-Pelletier is a highly respected Chief across Canada and she has been leading her community for nearly 4 decades and her hard work, dedication and integrity to serve her people shines through everything she does,” said FSIN Chief Bobby Cameron in a media release. “She is a true matriarch for her community and a role model for everyone across our nation and especially the women and girls who look up to her.”

Chief Day Walker-Pelletier has always maintained a healthy and sober life built on her First Nations traditions. One of her priorities has been a healthy family and community. She is a true champion and warrior for her people, who has worked tirelessly for the protection and preservation of our Inherent and Treaty Rights. Her passion for women’s and children’s issues is well known across North America, and has been instrumental in the formation of a menagerie of boards, commissions, organizations, and programs dedicated to the betterment of women and children, as well as the advancement and advocacy of the issues.

“Chief Marie-Anne Day Walker-Pelletier’s advocacy and guidance on issues we face as Indigenous people has been invaluable to not only our Tribal Council, but to the province and Canada,” said FHQTC Tribal Chief Edmund Bellegarde. “She has had to do all of this while simultaneously breaking down barriers for women and children. She casts a big shadow and her voice is thundering; when she speaks, people listen. We are truly blessed to have such a strong leader amongst us today.”

The ceremony conducted by the Governor General of Canada Julie Payette and took place on March 14, 2019 at the Rideau Hall in Ottawa, Ontario. Chief Day Walker-Pelletier was joined by her Council, family, and friends.