After discussions stemming back to 2017, in late November 2018 Cowessess Chief and Council passed a Band Council Resolution to have a new female youth care home built on their land, and last week the First Nation took another step to making it a reality. 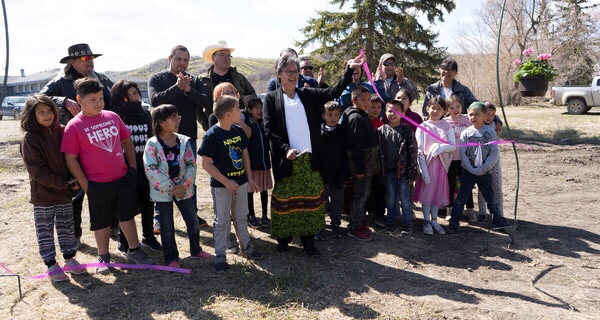 In a traditional sod turning ceremony held on Thursday May 9th, Cowessess broke ground where the home for ten female youth who are in are long term care with the Ministry of Social Services or First Nation’s Child Welfare Agencies is to be built.

The Basement construction for the home is scheduled begin on May 13, which will prepare the foundation for an RTM home which will be moved into place by the first of June. A naming ceremony for the new home will take place on May 31. The doors will open on July 1st with an open house on July 26. The first set of female youth will move in August 1.

“The toughest people to be in this country today is an Aboriginal female...so to bring home 14 to aging out females was a very easy task for us to choose,” said Chief Cadmus Delorme.

“We don’t want to come across like we know all the answers. We are very open minded and want to align ourselves with the professionals,” said Chief Delorme about this partnership.

“We are creating a supportive and nurturing environment that cultivates a sense of belonging within the community with a cultural focus towards self-sufficiency and independence,” said program manager Cindy Sparvier in press release. “The vision is to connect children in care to their communities, believing this bridge will become the community driver to asserting our right to raising in children. The home will aim to break down barriers for our people and bring the community together for generations to come.”

Cathy Stevenson has been named the Community Connections Outreach Worker. She will not only assist in the location of children in care but also be an advocate for whatever the children may need.

“I think it’s just a matter of taking back the responsibility one piece at a time,” said Chief Delorme.

He hopes that this is just the beginning and stated Cowessess would like to build more homes like this in the future.

“The ultimate goal is in 11 years we don’t have 110 kids in care we might have maybe 60 kids living in our homes that we are raising to make sure they are successful,” he said.

In total, First Nations children make up 87 percent of those children in care in Saskatchewan.