A grand opening ceremony was held on the Muskeg Lake Cree Nation to commemorate the opening of the community’s new cultural centre, which will be used for land-based learning.

On May 15, community members celebrated the opening of Askiy-Kamic. 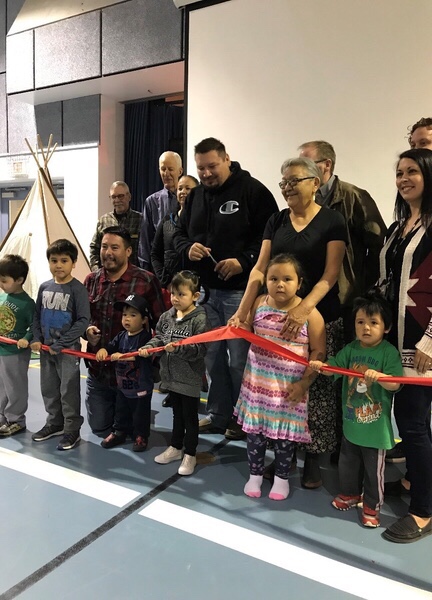 Students and teachers of Kihiw Waciston School on Muskeg Leg Cree Nation participate in a ribbon cutting on Thursday, May 15 to commemorate the opening of their new cultural centre Askiy-Kamic, which will be used for land-based learning. Photo by Frank Kigozi

“[This was] a very big day for Muskeg Lake. We are celebrating the actual land-based building where we can actually take our kids and teach our kids how to live off the land and be with the land,” said Jack Rayne, principal of Kihiw Waciston School. “I don’t see a cultural centre anywhere else that teaches all these land-based educational content. This land-based educational content is so vital to First Nations culture and that identity we’re promoting and giving our children here their education, identity and culture back to them.”

For the last two years the land-based education program at the school was held in the gym behind the school. Roughly a year and a half ago, there were questions of why there was no cultural centre for this specific program.

Principal Rayne spoke with Brad Nickel, who is the Director of Prairie Spirit School Division, as well as the Chief of Muskeg Lake Cree Nation and the principals at Blaine Lake and Leask schools.

After making it a contest to see which school out of the three could come up with the best name, the centre was christened Askiy-Kamic, which is Cree for the ‘house of land learning.’

The land chosen was set aside by an older couple from the area, as they wanted children to come and learn off it. This area is called the island since it’s a quiet, peaceful spot surrounded by the muskeg and is a boreal forest where nobody lives. It is used for hunting, trapping, and medicines. Since the land does not have electricity, solar panels will be installed for the centre.

This land has also been used for ceremonies, cultural camps, and cultural teachings in the past.

“Whether you are First Nations or not, you need to know how to live off the land because of global warming, we are going to continue having these crises with power and that,” she said.

This is the third year the land-based education program was offered at Kihiw Waciston School.