A project roughly 30 years in the making has finally come to fruition for the Ochapowace First Nation.

In the 1990’s Chief Denton George wanted to recognize that his people were starting to live on and off the First Nation and wanted to purchase land as a way of looking after his people and creating employment. As a way of doing this, he purchased a plot of land just east of Regina off Highway 1. 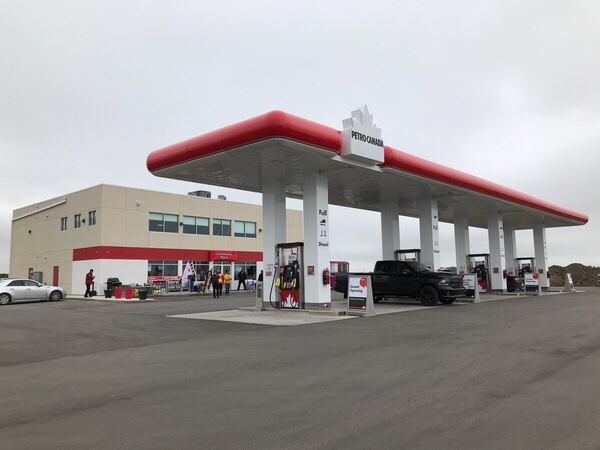 Petro Canada and Ochapowace First Nation created a partnership and opened on Highway One just east of Regina. This opening marks the 30th First Nations owned gas station in Canada and 17th in Saskatchewan. Photo by Jade Gritzfield.

In a partnership between Petro Canada and Ochapowace First Nation, it was decided this land would be used for a gas station and convenience store.

“For Ochapowace, it’s all about a nation and its peoples inherent right to self-determination that radiates a community vision and to be a proud prosperous and unified sovereign nation,” said Chief Margaret Bear about this decision.

In summer of 2018, construction started on this Petro-Canada which is the 30th First Nations owned gas station in Canada and 17th in Saskatchewan.

Chief Bear thought this was a good investment not only for economic development and partnership, but also for the future of her First Nations younger generation.

Although there was a soft opening in February, a grand opening for the gas station and convenience store was held on June 15 and hosted by the Ochapowace Nation Economic Development LP (ONEDLP). The ribbon cutting ceremony was in the morning and throughout the day, events like a mini pow-wow, bbq, live music, and prize draws filled the agenda. Elder dignitaries, and FSIN vice-chiefs Heather Bear and Morley Watson were also in attendance.

John Bear, who is in charge of the Ochapowace First Nation economic development portfolio, said this property was initially purchased at $400,000 and once fully developed with everything else that is planned to be put in such as a hotel and restaurant, the value will be roughly $10 to $15 million, so thinks good long term investment.

He would not specify what chains these would be but said they were well established ones. Although he would not speak to specific amounts Bear said that in the three months since it opened revenue has exceeded initial projections.

“The Petro Canada is a testament to what to what can be accomplished by creative determined people who are embracing the future for their people,” said Chief Bear.