Bradyn Parisian, founder & CEO Mo’ Solar Company, started his business when he noticed a gap in the market in Saskatchewan. 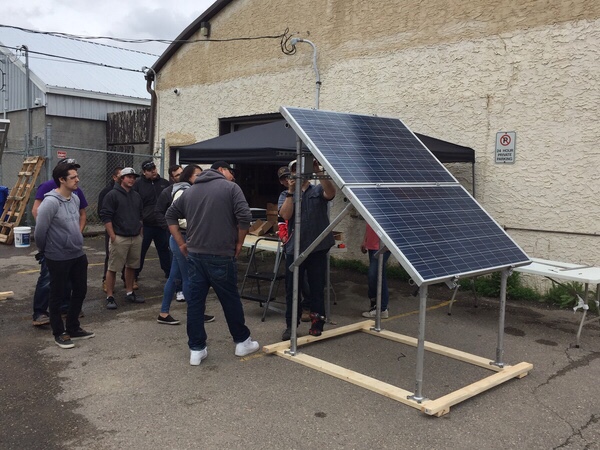 “I saw the solar resource maps of Regina and most of southern Saskatchewan is in this giant red omega shape which means ideal solar,” he said. “Regina is probably one of the best places in the country and possibly in North America just due to our climate, the number of sunlight hours we get, and the fact that skies are relatively clear most of the time.”

He got the idea for the First Nations Solar PV Installer & Design Professional Certification Course after working with First Nations Power Authority Board and seeing how workers were treated.

“I noticed that in the marketplace for labour there weren’t a lot of people who were trained in solar pv technology and proper instillation particularly when it came to Indigenous labour,” he said. “I see a lot of First Nations are pursuing their own solar utility scale projects and I’ve heard anecdotally that a third party company will come in as a partner help construct and design the project. They will employ a couple of band members as grunt laborers and then move on to the next one and that’s never really sat well with me.”

With the help of Mario Borsato, the founder of Canadian Solar Institute, they put together a one week program that would teach the students all things about the science behind solar PV, the technology involved and how to confidentially install it.

Former student Jacob Sinclair suggested his home of George Gordon First Nation to be the inaugural class because they recently awarded a 10 Mega Watt (MW) power purchase agreement (PPA) from SaskPower to build 10 mw solar farm which means that they can proceed with a utility-scale power project.

After consideration, George Gordon First Nation signed on to take the class.

“I think it’s a great course. It’s a lot of information in a matter of five days but at least they’ll have a good foundation that if they show up on a site they will have a fairly good understanding of what their role is and what the steps are to installing the panels and I think will make them more employable,” said Glen Pratt, CEO of George Gordon Developments Ltd.

The course, which took place at their business office in Regina, was co-facilitated by George Gordon Development Inc, was a way to get their own band members ready so they could build their own project next year once things are up and running.

Three of the 11 already have prospects of employment with various companies with one of them going to work with Mo’ Solar Company.