A partnership in Saskatoon led to the release of a second edition book aimed at enhancing an understanding of Indigenous culture and practices.

The City of Saskatoon collaborated with Saskatchewan Indigenous Cultural Centre (SICC) and Office of the Treaty Commissioner (OTC) recently released “ayisiyiniwak [a/yi/see/ni/wak, Cree for ‘the people’]: A Communications Guide” (ayisiyiniwak). 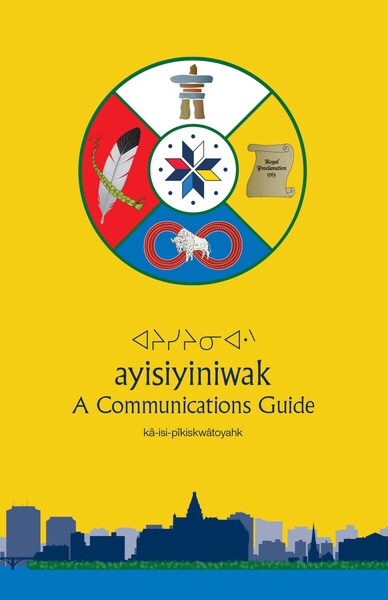 “The creation of ayisiyiniwak has helped us to build understanding and forge a path of partnership with the Indigenous community,” said Mayor Charlie Clark in a media release. “The leadership shown from our staff in partnership with the OTC and SICC is something to be truly proud of. Now I have civic leaders from across the country asking me for these guides.”

The guide was made two years ago as an educational resource for City of Saskatoon employees to have a strong understanding of Indigenous culture and practices. Ayisiyiniwak have been requested by organizations across Canada including government agencies, other municipalities, educational institutions and community groups. The second edition of the guide has been updated with a chapter devoted to Métis culture and local history; a new Inuit chapter; revised Cree translations (including the title) as reviewed by nêhiyawak or Cree speaking linguists; new sections within the First Nations chapter including 60s Scoop, Elder’s Helper, Syllabics, Flag Etiquette, Anthems/Honour Songs, The Grand Entry, Blanketing and Two-Spirit People; several new terms and suggested resources.

“The Saskatchewan Indigenous Cultural Centre is pleased to be part of this handbook. On behalf of the Board of Governors, the Elders Council, and the staff we would like to commend the City of Saskatoon and the Office of the Treaty Commissioner for their commitment and dedication to developing this second edition. Education comes in many forms and this handbook provides a platform for, not only City employees, but for everyone to enjoy and begin to learn a little about Indigenous culture,” said Wanda Wilson, SICC President. “Reconciliation begins with understanding. Understanding begins with openness, respectfulness, compassion, and willingness. Understanding isn’t always easy or beautiful, it takes time and is very personal. Be patient and open to learn and become more mindful and respectful of Indigenous ways of being.”

The guide is part of the City of Saskatoon’s commitment to respond to the Truth and Reconciliation of Canada’s Call to Action #57, which specifically calls upon governments to “provide education to public servants on the history of Aboriginal peoples, including the history and legacy of residential schools, the United Nations Declaration on the Rights of Indigenous Peoples, Treaties and Aboriginal rights, Indigenous law, and Aboriginal-Crown relations.”

The Office of the Treaty Commissioner is committed to engaging in public information and awareness to advance the Treaty goal of good relations.

“The ayisiyiniwak communications guide continues to grow and support the work of reconciliation,” said Treaty Commissioner of Saskatchewan, Mary Culbertson. “Being able to understand each other results in building positive, trusting relationships.”

For more information and to download and digital copy of ayisiyiniwak, visit saskatoon.ca/ayisiyiniwak.