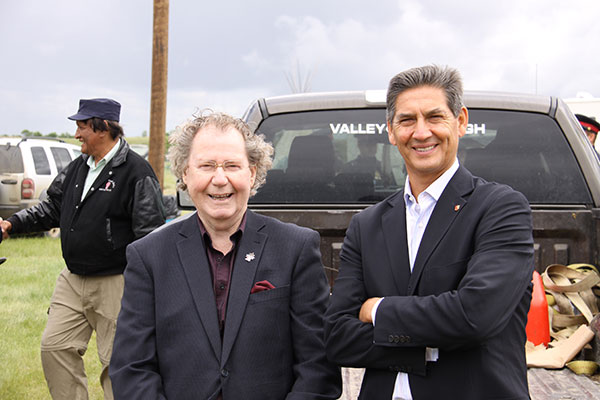 In his work in Ottawa, Bill McKnight was a pivotal player in the development of the Treaty Land Entitlement Settlement of 1992(TLE). The result of TLE has been an explosion of growth of First Nation reserve lands in Saskatchewan and the development of urban reserves.

McKnight was so respected that the Muskeg Lake Cree Nation made him an Honourary Chief. No small honour. Muskeg Lake Cree Nations urban reserve in Saskatoon, a role model arrangement and business success in its own right, was named the McKnight Commercial Centre in recognition of his role in creating federal policy for the Land Claims Settlements. TLE has been a political and financial success for Canada, Saskatchewan and the First Nation governments involved and has helped enter First Nations into the bustling urban economy they had historically been shut out of.

He retired from Federal politics in 1993 and became a world travelling business man. He knew how to open doors politically and internationally. Beginning in the summer of 2007, the Honourable Bill McKnight became the Treaty Commissioner of Saskatchewan where he served until 2012. Like when he was in government, McKnight worked to advance the First Nations treaty right to livelihood — prosperity, economic self-sufficiency, and independence.

I had the pleasure to sit on the Saskatoon United Way Leadership Committee to End Homelessness with Bill. Just like when he was a politician or Commissioner, Bill cared about the people we were building the project for. It was magical to watch him mull and thought, then lay down a strategy to move an agenda item along. All the while in his calm even voice. He also had the power to phone into Regina and secure meetings with Ministers and Deputy Ministers in one call. He was retired. He had done enough. But he still went out and did more.

His pragmatic, diplomatic and gentle ways helped him stickhandle many political hot topics in Ottawa and as Treaty Commissioner and he always did it with class. His legacy will be well preserved as the McKnight Centre in Saskatoons east side continuers to bustle with economy and people working. And out there right now, some one has a roof over their head and safe affordable housing for them and their children. Well done Chief McKnight. Well done.

Speaking of politics, remember to get out and vote. Set a precedent for your children. The more engaged they see you in the process, the more they will pay attention and learn to use the power of the ballot to make change in our country. Looking at the leaders now though, Trudeau and Scheer both have lost the Indigenous vote and lots of credibility. One with the blackface and one with a fluffed-up resume who, before politics, was nothing more than a glorified office boy in an insurance agency. Weak. Sorry, Scheer never had the Indigenous. But I digress. Minority government coming October 21st. Does this mean a minority government with the NDP and the Greens helping someone form power? Every vote counts. Fun!

Speaking of political role models, October 2019 Marks the 175th Anniversary of the Birth of Louis Riel. To commemorate this, the Minister Responsible for First Nations, Métis and Northern Affairs, Lori Carr announced that October will be proclaimed as the Month of the Métis in the province of Saskatchewan. A number of events have been planned throughout the province, including several at Government House in Regina.

October 1, 2019 to November 10, 2019 Government House will feature an art exhibition by Métis artist Leah Marie Dorion: Being One with the Earth and will also display a rare Hudson’s Bay Company 1870 Promissory Note, issued at Fort Garry during the Red River Resistance (on loan from the Regina Coin Club).  Also, on display will be a sample of Métis Scrip which was offered to Métis families to compensate them for loss of their title.

While you are at Government House, you may also meet another political, Indigenous role model, Lieutenant Governor Russ Mirasty and speak Cree with him. Nice. Go vote.