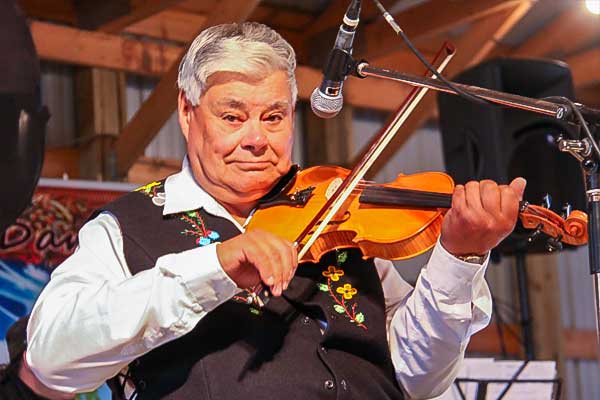 All three will be honoured with the Order’s Gold Medal, which recognizes a lifetime of outstanding service to the Métis of Canada, at a ceremony in February in Saskatoon.

The Order of Gabriel Dumont is awarded by the Gabriel Dumont Institute (GDI) to persons who have distinguished themselves with outstanding service to the Métis of Canada.

“It is one of the Métis Nation’s highest civilian honours, awarded to Métis and non-Métis individuals based on their achievements and lifetime contributions,” Geordy McCaffrey, GDI executive director said in a media release.

Arcand, from the Saskatoon Area, is renowned for his contribution to preserving, promoting, and sharing Métis fiddle music.

Chartier, from Buffalo Narrows,  served as President of the Metis National Council for 16 years. He is a lawyer, writer, lecturer and activist who has served in both political and administrative capacities with numerous Indigenous peoples’ organizations, including serving as President of the World Council of Indigenous Peoples between 1984 to 1987 and as vice-president between 1993 and 1997.

Barkwell, from Winnipeg, has had a distinguished career with the Manitoba Métis Federation (MFF) as the Director of the Métis Justice Institute and as the Louis Riel Institute’s Coordinator of Métis Heritage and History.

The Order of Gabriel Dumont Silver Medal will be given to two individuals who have made significant contributions to the Métis. Glenn Lafleur, of Beauval, served on the Gabriel Dumont Institute Board for 15 years. He is a community leader who has volunteered to work with youth and has been instrumental in attracting corporate financial assistance for Métis students in Saskatchewan.

Norma Welsh, from Regina, has spent most of her life promoting Métis culture and well-being. She was a member of the first board of the Gabriel Housing Corporation (GHC). The respected Elder is renowned for her volunteer work at Métis events.

Twenty Order of Gabriel Dumont Bronze Medals will be given to honour GDI students and alumni who have distinguished themselves through leadership, community involvement, and overall performance.

Since its inception, 48 individuals have been invested into the Order. Appointments are made by GDI, based on nominations from the public.

Saskatoon-based Gabriel Dumont Institute of Native Studies and Applied Research (GDI) is a Métis-owned post-secondary and cultural institution with campuses across Saskatchewan.