Time for Macdonald statue to be removed from Regina park, activists say 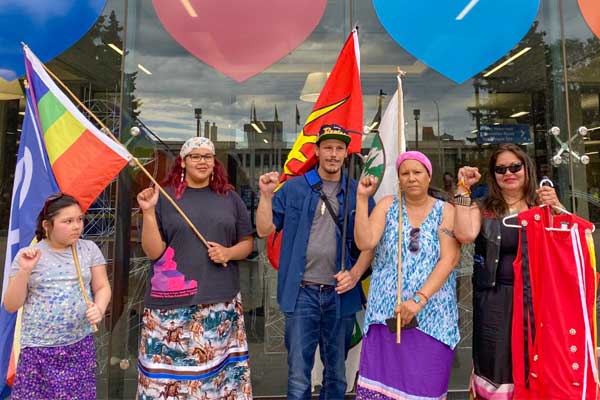 A petition to remove the John A. Macdonald statue from Regina’s Victoria Park had drawn 1300 virtual signatures as of June 24.

The Facebook petition was created the week of June 15 by Star Andres and Kerry Bellegarde-Opoonechaw, who say it’s time, as statues of racist or controversial historical figures around the world are being removed.

“We watched Columbus be taken down today ... We expect the same.” said Andres.

Andres and Bellegarde Opoonechaw are staging peaceful sit-ins at the statue at 1 p.m. daily and say they will do so until the statue is removed. They call on First Nations leaders to join them.

Canada’s first Prime Minister was responsible for Indian starvation policies and residential schools, implemented the Indian Act and contributed to the cultural destruction of Indigenous people in Canada.

“You wouldn’t want to take your kid to a park and say, ‘look at this guy he killed half of the [Indigenous] people.’ You might as well [have] a statue of Adolf Hitler there,” said Bellegarde-Opoonechaw.

“We’d just like something nice in Victoria Park, something we can be proud of.”

Andres says she would like to see immediate action, as there have been petitions, vandalism and calls to have the statue removed for years.

Metis artist and University of Regina professor David Garneau said he was surprised when he moved to the city in 1999 to see the statue of John A. Macdonald, the man responsible for the execution of Metis Leader Louis Riel, who was hung in Regina.

“The statue of John A. Macdonald in Regina is a clear provocation, a visible reminder to Indigenous people what happens if you resist white authority,” Garneau said in an email. “It is important to note that the metal man only went up in 1967, during the era of Civil Rights and Indigenous rights protests.”

Garneau performed an art piece in 2014 dressed as the ghost of Louis Riel with a noose around his neck addressing the statue.

“I do not think the statue should be destroyed,” said Garneau. “It should be retired to a museum. It should be surrounded by information about John A. Macdonald and his policies regarding First Nations and Metis people.”

Garneau says it would be a step towards reconciliation.

“The city can prove that they are trying to back us up ... This is the time and age to step up as true leaders.” said Andres.

Regina Mayor Michael Fougere said in an email that the City began discussions with Indigenous Elders and knowledge keepers in early 2020 regarding the statue, but talks stalled due to the pandemic.

“The City of Regina will review items in its collection,” Fougere said. “The engagement process would include both the cultural sector and specific stakeholder engagement with members of the cultural communities impacted by the legacy.

“Options to address the legacy include counter-monuments or other response pieces, re-interpretation in order to tell a more complete story about the legacy, replacement of the article, and removal.”