Op-ed: Our young people are on the right road

I remember being young. Best and worst time of your life if I remember correctly. Your options are unlimited and you are likely in the best shape of your life...but challenges and dangers lurk around every corner. One false step or bad decision and things can go south on you fast.

That is why it is so important to support young people in making great choices out there and nowadays it is getting easier to show our young people the right road. Why? Because so many young people are already on that road and it is easy to point to role models.

Kendal Netmaker, the guru behind Neechie Gear, has become so famous for his philanthropic and entrepreneurial ways that he now has his own personal cheer team that follows him around! Whenever he speaks at a conference (this guy is an international draw and has won contests in the USA and has also spoken at global entrepreneur conferences as far away as Russia!) he is escorted in by his cheer team....whenever he has a sale at his store, boom, the cheer team shows up! Don't believe us? Just look at this photo. 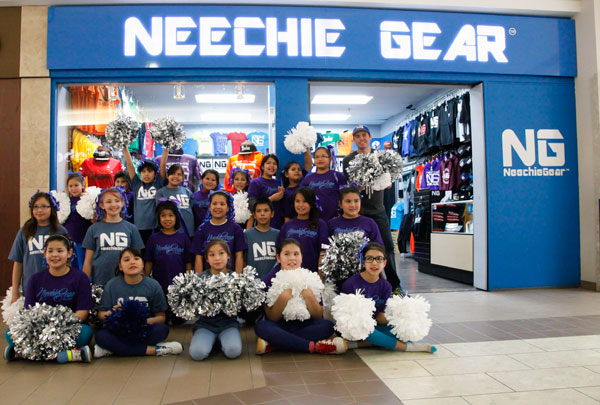 But really, we kid. Kendal, deserving though he is of a cheer team, does not have one following him around, but the St. Frances Cheerleading team did show up at his Neechie Gear store at the Centre Mall to do a cheer to thank him for his donation of shirts and support of the cheer team. On top of that, Kendal also donates over $5000 yearly to KidSport. How are fellow entrepreneurs supposed to keep up with that guy?

And it's not just Kendal out there making waves. Young Devon Fiddler is carving a niche in business. Heather Abbey of shopindigenous.com has broken through. Go look at the University of Saskatchewan and the leadership roles Max Fineday and Jack Saddleback have assumed. Actually go to any SIIT, FNUniv, SIAST or GDI campus and you will see current leaders and movers and shakers that are just coming into their potential. Also check out our pal motivational speaker Mike Scott who has 5000 friends on Facebook and another 25,000 followers. How refreshing to have such focused and powerful young people in the community. And how refreshing to have so many young people look up to and aspire to be like these young leaders.

And a fond farewell

We have to offer a big tip of the hat to former Assembly of First Nations Chief Shawn Atleo. Never in the history of Canada has such an esteemed and credible leader been subjected to such lateral violence and media spin and worst, the incessant squawking of Pamela Palmater. You would have resigned too if you had to be under attack, a vicious attack at that, every day for trying to do your job.

The amount of vitriol and lateral violence can be summed up in the press release we received from Idle No More about Atleos resignation. And we quote "Today, after four years of servility and weak leadership.....most recently, he has served as the fig leaf for the government's Orwellian First Nations Education Act."

Servility and weak leadership and a fig leaf. Hmmm. We always thought that idle No More was based on peaceful protest and education....not attack, slam and slur politics, especially towards a man who has committed his life to his family, his people and First Nation education....when did this change happen? Did they smudge before they wrote that hateful piece of media release? Did they think that maybe his children would read that?

If you want the right perspective on this whole mess, read Wab Kinew's piece in the Huffington Post. He gets it. A pragmatic insight that shows Wab is truly a national leader in Canada and is balanced and respectful. Let's bring more of that back into our politics nationally and at the First Nation and Métis Local level please. Much needed. We don't need any more enemies.

We want to offer a big welcome to Jeanelle Mandes who has joined Eagle Feather News for her internship out of the University of Regina School of Journalism. Jeanelle will be with us until after the summer and will be our source for all things NAIG!

We also want to welcome Conrad Naytowhow as one of our freelance writers. Known as thatconradguy, Conrad travels all over the north to community events and he has agreed to be one of our correspondents. Welcome aboard both of you!