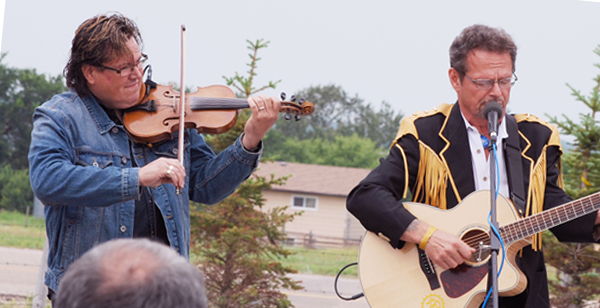 Eight years ago, Métis singer/songwriter Donny Parenteau assembled a collaborative album, published by the Gabriel Dumont Institute (GDI), called Honouring Our Heroes: A Tribute to Métis Veterans. This November, Parenteau and GDI reassembled that collection of artists for a virtual concert in honour of the men and women who served our country.

“We wanted to bring six Métis artists together, across the whole land, who could pay tribute to Métis veterans,” said Karen Shmon, Director of GDI Culture and Heritage. “(Songs) that showed that because of their courage and sacrifice, these (musicians) were able to pursue their dreams of becoming a performance artist.”

Featured in the concert, alongside Donny Parenteau, are musicians Andrea Menard, Jess Lee, Ray St. Germain, Krystle Pederson, and Mike Gouchie, each from a different area of Western Canada.

The virtual concert premiered on November 8th, National Aboriginal Veterans Day, on GDI's YouTube page, and will be available through Louis Riel Day, until the 18th.

“Continuing to honour our veterans is so important because we've had generations of peace time, and there's so few Veterans left, so there hasn't been many contemporary families who have lost a loved one who has sacrificed their life serving our country,” said Shmon.  “We now may have people who may be forgetting the freedoms that we enjoy.”

The project is deeply personal to Parenteau, who had several uncles and family members who served in World War II. He talks about the discrimination and lack of recognition these Métis soldiers, like those in his family, often faced, either being told they were either 'an Indian or a white', he says.

“That's why this project means so much to me. We don't have to hide behind anything anymore. We can say exactly who we are,” said Parenteau.

One of the most challenging and rewarding undertakings of the initial project, said Parenteau, was writing a melody for In Flanders Fields – the famous war poem written by Canadian John McCrae during the First World War. The resulting song, which can be heard in the virtual concert, features Parenteau's idea of having all six of the Métis performers sing a line in the song.

The entire project and reassembling the artists eight years later for the concert, was a task Parenteau was happy tackle, as we have a responsibility to remember our history, he said.

“I take a lot of pride in what those people did for us. I also take offence to the people who don't,” said Parenteau.

“If we don't remember, then history will repeat itself. I don't forget the people who have done what they've done – we wouldn't be where we are today, everything we have when you look around you. That's where my pride comes from.”

A physical copy of the album can be purchased on GDI's website, the proceeds of which go to the Métis Veterans Memorial Monument at the Batoche festival grounds. The monument, which currently has the names of over 5500 Métis engraved on it, is the first ever Métis specific veterans’ monument.