Sasakamoose’s amazing life to be retold in forthcoming book 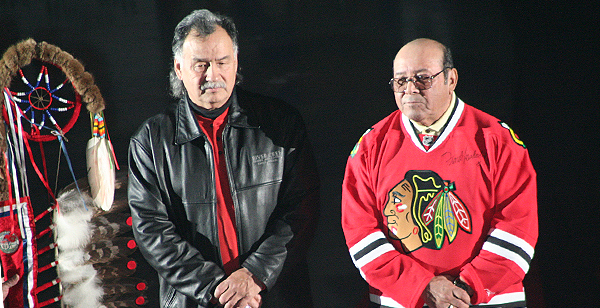 Condolences and tributes continue to pour in for Fred Sasakamoose.

The Ahtahkakoop Cree Nation man, who was one of the first Indigenous hockey players to make it to the NHL, passed away from complications due to COVID-19 on Nov. 24.

Although Sasakamoose’s time in the NHL was brief – he played 11 games for the Chicago Blackhawks during the mid-1950’s – his role as an ambassador for Indigenous people in sport, while overcoming great challenges, spanned decades.

His son Neil said Sasakamoose never let his difficult childhood and youth prevent him from reaching out across communities as part of a lifelong effort to break down racial barriers.

“That’s one of the complexities of his story,” he said. “He was able to tell it to an audience of non-First Nations people without making them feel ashamed about race relations. He can tell it and he can orate it in a way that you feel that you can understand it.”

A number of Sasakamoose’s trials and tribulations are outlined in a forthcoming book titled Call Me Indian.

These stories include attending St. Michael’s Indian Residential School in Duck Lake and later playing for the Moose Jaw Canucks in the Western Canada Junior Hockey League as a teenager.

Because of his lethal shot Sasakamoose came to be known by the nickname “Thunderstick.”

Neil said by the time his father reached the Canucks as a 16-year-old, he came to realize how inferior his education at residential school had been compared to that of his teammates.

In reality, he said Sasakamoose had only a grade five reading level and the team told him he did not have to attend high school.

“That was the first challenge for him, was opening up. That would have been a hard secret. Even today, people struggle. If it is such a big deal to the other person that they’re educated and you’re not, you try to hide yourself from that so you don’t feel ashamed.”

Sasakamoose’s time in the NHL was short.

Neil said things started well for his father with the team, but when he showed up at training camp in 1954 out of shape, Chicago wanted to send him down to the minors.

Sasakamoose, who had recently married and was missing his wife back home, was having no part of this plan and returned to Ahtahkakoop, he said.

Eventually he stayed home for good and because the Blackhawks refused to trade his rights to another team in the rigid Original Six era, his NHL career was effectively over by the time he was 22.

“You try to understand why he wouldn’t stay but I think his spirit was wild too,” Neil said. “He was a wild 20-year-old. He was strong and stubborn. You would have to be to go through all that stuff.”

He said some dark years followed for his dad but he would eventually turn himself around and become an elected councillor and later chief of Ahtahkakoop Cree Nation.

Sasakamoose would serve his community in politics for a total of three decades.

In the early 1980s he overcame yet another challenge by overcoming an alcohol addiction.

Much of Sasakamoose’s later years were spent speaking to and inspiring Indigenous youth around the province.

He received many awards and honours over the years including the Order of Canada and a place in the Saskatchewan Sports Hall of Fame.