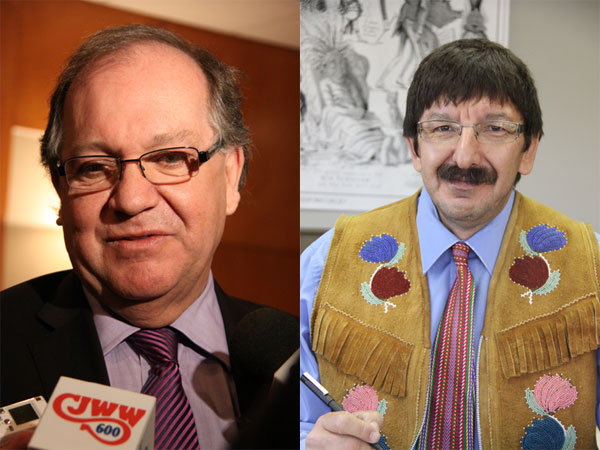 Bernard Valcourt (left)has sent a letter to Métis leaders across Saskatchewan, such as MN-S President Robert Doucette (right), explaining the reasons for the government’s decision to default MN-S funding.

The Métis Nation-Saskatchewan has just been placed in default of its funding agreement with the Federal Government. The organization will lose its funding effective November 1, 2014.  Aboriginal Affairs Minister Bernard Valcourt has sent a letter to Métis leaders across Saskatchewan explaining the reasons for the government’s decision.

The letter was long in coming. A divisive rift between members of the Provincial Métis Council has led to no PMC meetings being held. No PMC meetings mean no Legislative Assemblies can be called. No meetings, no governance, no funding.

MN-S President Robert Doucette insists he has tried to call repeated meetings since this summer and has provided audits and other information requested but to no avail. “It is sad that it has come to this,” said Doucette. “At the end of the day, Métis citizens are impacted the most when their leaders don’t work together. I am attempting to convene a PMC meeting next week. I hope the majority of them will attend.”

Darlene McKay, Area Director for Western Region 2 disputes Doucette’s assertion that they won’t meet. “We have invited him and the executive to several meetings where we had quorum but they didn’t show up,” said McKay from her office in Prince Albert. “And Robert insists on calling a meeting with one agenda item, an MNLA. But how can us as a Council go to an MNLA when we have not had proper reporting for years. We want full documentation on several different topics including the taxes owed at Batoche. We are responsible for this.”

The MN-S has 12 Regions, each with an (unpaid) Area Director and an estimated 130 Locals, of which, according to a report made by consulting firm Delloite, only 30 Locals actually fit the Constitutional criteria to qualify as a Local. The governance struggles and lack of progress have been public and very frustrating for Métis people.

The funding cut would directly affect the Métis Nation-Saskatchewan executive and staff but beyond that the average Métis citizen shouldn’t be impacted and may even be welcoming of some change. The feud and struggles at the Métis Nation-Saskatchewan have been running for years and some see this as a breaking point. “There may be no impact at all in the community,” said Murray Hamilton, an educator and former Vice President of the MN-S. “It has come to the point that the Métis Nation has no significance on our daily lives and is almost irrelevant. I would worry about Batoche and our affiliates, but I ask you this. Are you going to miss your Area Director?”