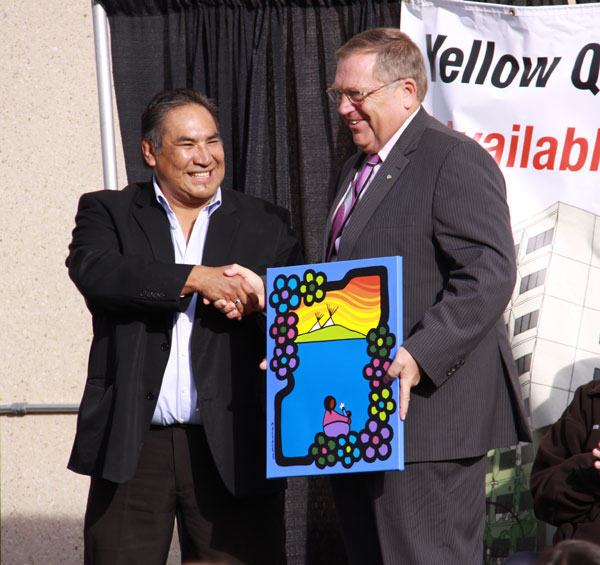 “We wanted to replicate the success we have had with the First Nations Bank Building,” says Chief Larry Cachene. “We did thorough research and determined the best use was to invest in another commercial office space. We presented our research and reports to our members and they voted overwhelmingly in favour of the project.”

According to Chief Cachene, the band has invested $1 million and three years in the project and is looking for more tenants and the announcement was to show people they are serious about the venture.

An artist's rendering by Kindrachuk Agrey Architecture of what Yellowquill's downtown Saskatoon building will look like.

The office building will be environmentally designed with LEED gold certification targeted. Its high-profile downtown location near the river makes it an appealing choice for businesses and the project plans are scalable so additional floors can be added if demand exists. Plans for construction will move forward once sufficient leasing commitments are in place and the First Nations Bank of Canada has already signed on to be the first tenant. 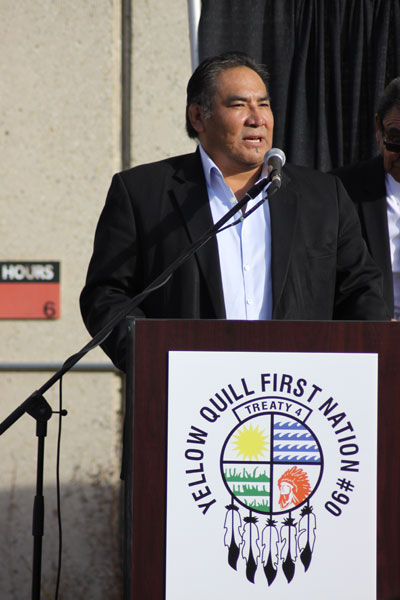 Harry Lafond, Executive Director of the Office of the Treaty Commissioner knows urban reserves well. He was a councillor of Muskeg Lake Cree Nation when they created the first urban reserve in Saskatoon’s Sutherland neighbourhood. “This future building is the result of the hard work of the Office of the Treaty Commissioner since 1989 and the TLE agreement,” said Lafond at the announcement. “It also shows that the Treaty 6 people are willing to share with Treaty 4 people, even the prime real estate in downtown Saskatoon,” he joked.

The goal of the project is to generate long-term revenue streams for Yellow Quill First Nation to reinvest into its community and membership, particularly in the areas of education and housing, as well as contribute to a more vibrant downtown Saskatoon.

“Now that we have achieved reserve status with this property, we have enhanced our attractiveness to businesses including First Nation businesses or by those businesses who want to build strong partnerships with First Nations,” said Chief Cachene. “The business community wants to attract and engage First Nations people into the workforce. This office building will provide an excellent vehicle for those partnerships and will contribute to the growing Saskatchewan economy.”