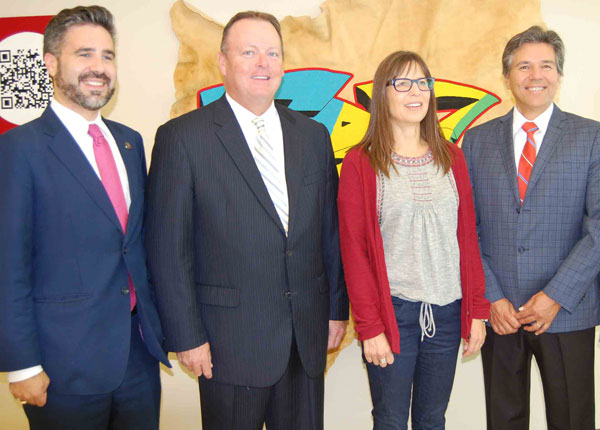 A muskeg tea send off ceremony was held at the First Nations University of Canada (FNUniv) for Judy Anderson, an Associate Professor of Indian Fine Arts before she departs on Sunday to study and learn at London.

Anderson will be studying and teaching for eight weeks at the Prince’s School for the Traditional Arts (PSTA) in the United Kingdom to share her skills and knowledge in this area.

“I’m really looking forward to the experience like learning how to make a pigment from rock, wood marquetry, and way more that I’ll be learning,” says Anderson. “I look forward to learning the other traditional arts that are taught at the Prince’s school and to meet the students there. I welcome the opportunity to share the things that I know and learned,” she adds.

Minister of Advanced Education, Kevin Doherty, attended the event to extend his wishes to Anderson and her son who will also be attending.

“It’s an honor for to have been invited to by the Prince’s School of Traditional Arts...to share her art and the history of Saskatchewan’s Aboriginal people in spirituality,” says Doherty.

The Ministry of Advanced Education and the government of Saskatchewan are sponsoring the Prince’s Charities of Canada by funding the faculty exchange program which Doherty says is a part of the provincial government’s growth plan.

The partnership between FNUniv and the Prince’s School was established when Prince Charles made his Royal visit to the school back in May 2012.

Matthew Rowe, the Manager, Operations and Partnerships of Prince’s Charities Canada (PCC), was also in attendance and says after the Royal visit, His Royal Highness made a memo on his plane ride back to the UK on ways to keep the connection with Canada especially with the First Nations people.

“The number one item on his list was to find a way to do more with First Nations people...and engage through his charitable work,” says Rowe. “His Royal Highness was so impressed by what he saw here,” he adds.

Anderson will be taking her son Cruz along to document the whole experience using photos. He was also given the opportunity to take any course at the Prince’s school for their duration. FNUniv President, Dr. Mark S. Dockstator, Dr. Lynn Wells Vice-President of Academic was also in attendance along with Anderson’s family.