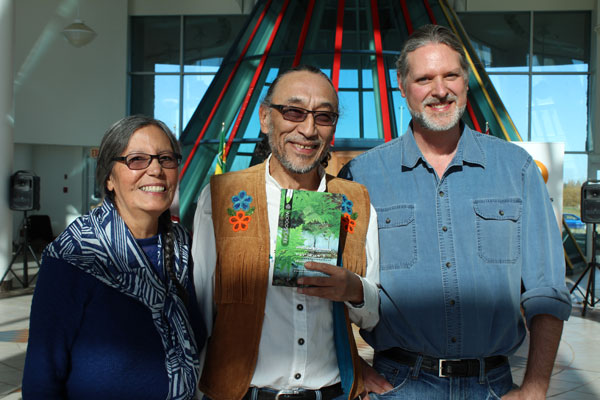 Solomon Ratt says he was nervous for this day to come where he finally launches his new book after waiting for two years to complete it. The Associate Professor from the First Nations University of Canada (FNUniv) launched a new book called “Woods Cree Stories” in Regina.

“It’s a wonderful day because it allows the stories to go out into the schools. I hope people enjoy the stories,” says Ratt.

Ratt says he needed scholarly materials so he created a lot of stories for the classes he teaches and to be available for students to learn.

“There are very few people out there that write in Cree, there’s hardly any books out there in Cree especially ones that are written in syllabics. Very few people know how to read syllabics,” adds Ratt.

His book was published by the University of Regina (U of R) Press who were also present at the book launch. Bruce Walsh, director and publisher of the U of R Press, says this book is a part of their First Nations language reader series and says it’s a real privilege to bring these types of books to the public.

“It’s a wonderful read; it’s in Cree syllabics and also in English. It’s an exciting book for us because we didn’t have a book exclusively on Woods Cree,” says Walsh.

The book costs $24.95 but buyers had the chance to buy them a few dollars cheaper for the day of the launch.

That is good news for people who attended the book launch like Sean Lerat-Stetner who purchased two books as a present for his mother.

“As soon as I saw it, I thought of my mom and figured she’d like them for Christmas. I’d probably take a quick read before I hand them over to her,” he says laughing. “I hope to see more like these.”

That’s agreeable for Walsh who says they hope to publish more books such as Ratt’s newly released book.

“Our goal is to publish all 60 plus languages in Canada,” says Walsh. “This is the foundational language of our country in many ways and we want them available as broadly as possible.

“We’re really thrilled to publishing [Ratt’s work], we want to do more work with him,” he adds.

This book is available at Chapters or online through the U of R Press website or people interested can request it at local libraries.