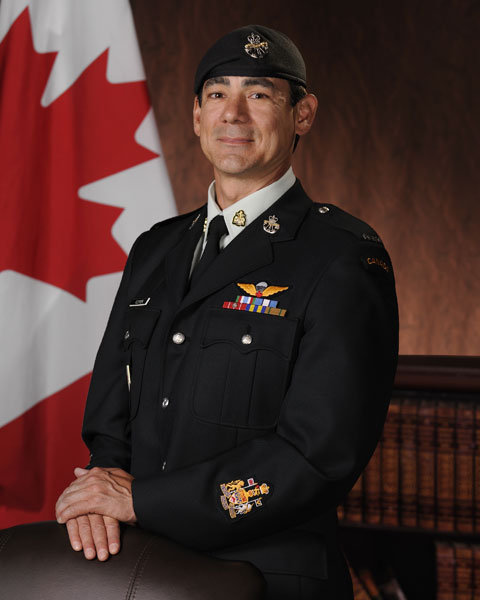 Joel Pedersen is a multi faceted individual. He runs training programs for First Nation and Métis communities across Saskatchewan and in Saskatoon. He writes a monthly exercise and health column for the Eagle Feather News web site. He is a police officer with the Saskatoon Police Service. On top of all that he is also kind of a big deal in the military reserves.

Last year he was appointed the Regimental Sergeant Major of the Royal Regina Rifles and the North Saskatchewan Regiment which are both primary reserve Infantry units, and he was promoted to the rank of Chief Warrant Officer (CWO) in the Canadian Army. That is the most senior Non-Commission Officer rank in the Canadian Armed Forces.

This high posting makes Pedersen the first First Nation Regimental Sergeant Major of both units which have history from way back to1885 through to Afghanistan. Out of approximately 87,000 members of the forces, currently there are only two First Nation CWO’s in the Canadian Armed Forces and Pederson is one of them.

“I did not do this on my own, I owe to those who came before me, the aboriginal men and women who volunteered and served with honour, dignity, and courage,” said Pedersen of his rise through the ranks. “I owe a lot to my family, colleagues and even the ones that said I could not do it.  Those NCO’s who offered opportunity, leadership, guidance and mentorship so that I would mature and succeed I am forever grateful to.”

Pedersen’s mom’s family is from Fond du Lac First Nation and his dad is Mikisew Cree from Alberta. He credits many First Nation role models in the service going back to Sergeant Tommy Prince and Sergeant Alex Wuttunee to a mentor in Sergeant Grant Greyeyes and even a fellow he worked with at the Saskatoon Police Service. “Master Corporal Ernie Loutit who was proud to be an Indian and the army culture that treated him with respect and responsibility. These are some of the men who set the example and were role models for me,” said Pedersen.

He intends to take what he has learned and pass it on. “Now is a time during the next three years I intend to mentor, guide, and lead the next generation of soldiers and future leaders.  I will not ask any of them to do a task or a job that I am not willing to do, or that I have not done or experienced.”

Pedersen’s experience in the Army has taken him to see a lot of the world including Europe, Scandinavia, the Middle East and lots of North America and he directly credits his training with allowing him to start his fitness business and become a Saskatoon Police Officer. And he recommends the military as a great starting point for any young person. “The military trained me to do more than what is expected. To appreciate my own strengths and limitations and pursue self-improvement, seek and accept responsibility, know your people and promote their welfare and develop the leadership potential of your people.  These are some of the principals I try to use to the best of my ability each day.” said Pedersen. “In the military it does not matter what color of skin you are, that is not what separates you from others.  It is about being a soldier and putting others first, respecting yourself so that you can respect others.”

You can read monthly columns from Pedersen in our Health and Sports sections.