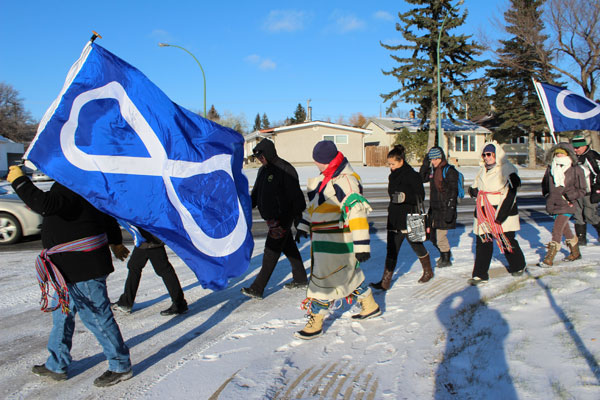 Despite the chilly weather, some of Regina's Métis people came together to honour the anniversary of Louis Riel's execution on November 16, 1885.

Throughout various locations in Canada, many celebrated this day to commemorate the Métis leader.

Dennis Brooks, President of the Regina Riel Métis Council Local #34, organized a memorial walk and a vigil to remember Riel who was hanged for treason.

"This day is when Louis Riel died and it's a meaningful day for Métis culture because he was our leader and we want to make sure that he is remembered," says Brooks.

With a few holding the Métis flags with pride, participants of the walk met at Optimist Park and then proceeded to the Regina R.C.M.P barracks where the actual hanging took place 129 years ago.

Once they arrived to their destination spot, everyone gathered around in a circle for an opening prayer and then proceeded into the RCMP chapel to listen to several guest speakers. Each of the speakers talked about why celebrating this day is important to them and everyone listened to a poem and fiddle song dedicated to Riel.

Brooks says this day is important to remember the contributions a historical Métis leader had made.

"This is the sixth year this has been run through this local and we're hoping to continue this for a long time," says Brooks.

Following the ceremony, everyone joined at the Indian Métis Christian Fellowship center for a meal and some entertainment.