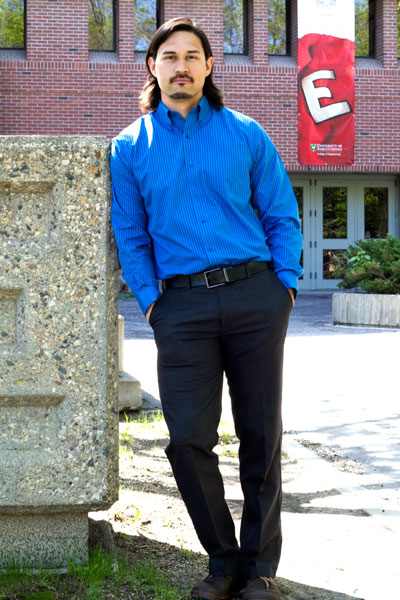 Matthew Dunn is the new Indigenous peoples initiatives co-ordinator for the University of Saskatchewan College of Engineering. Photo: Jeff Drake

With the hiring of Matthew Dunn as the new Indigenous peoples’ initiatives co-ordinator this past spring at the University of Saskatchewan College of Engineering, a number of important initiatives are moving forward under the college’s Aboriginal engagement strategies.

At the top of Dunn’s list of priorities is establishing an Indigenous Students’ Centre in the college. Currently, that task is at the stage of renovations, managing costs and looking at layout options. He expects it will be March 2015 when the centre opens. He has also been working with students to establish an Engineering Indigenous Students’ Association at the college.

A number of other initiatives lie before him, but getting these initial activities off the ground successfully is critical to achieving further plans, he explained. He is looking forward to the opportunities related to the recent hiring of Duncan Cree, who joined the college faculty from Ontario’s Queen’s University engineering faculty in November 2014.

Growing up primarily in Watrous, Saskatchewan, Dunn developed an early interest in becoming an astronaut. A NASA brochure with information about aerospace engineering helped him decide to pursue a degree in engineering. When he chose to study at the U of S to stay closer to home and to attend university with many of his friends, he chose mechanical engineering as the closest thing to aerospace engineering that was available.

While at the university, he was involved in Huskies Track and Field as a jumper, pole vaulter and ultimately, a pentathlete. While he confesses that pole vault wasn’t his strength, that was where he met his wife, Adrianne Vangool. Sports continued to be an important part of Dunn’s life, leading him to competitive bobsleigh and skeleton. He was on the Canadian national skeleton team and attended World Juniors in bobsleigh in Europe.

“It kept me busy, active, out of trouble,” he noted. This past July, he was head coach for track and field at the North American Indigenous Games in Regina in, his first coaching experience.

His focus on sports, alongside working at March Consulting in Saskatoon and pursuing his MSc in mechanical engineering kept him busy from the summer of 2004-10. After completing his masters, Dunn worked for eight months in Fort McMurray for a construction services company. While glad to have experienced it, he decided the work together with the commute from Prince Albert, where his wife was working as a physiotherapist, wasn’t for him. At that point, both found jobs in Saskatoon, Vangool as a physiotherapist and Dunn at PotashCorp, where he spent two-and-a-half years.

He was looking for something different when he became aware of the Indigenous co-ordinator position at the college. The opportunity offered him the chance to do something he had thought about as a student: support the development and growth of an Aboriginal community in the college.

“When I attended school at the college, I didn’t have a sense of there being an Aboriginal community here, but I’ve definitely found it here, now.”