Indigenous actor coming to a TV screen near you

He may not be a household name yet, but Apollo McLean is working on it.

Fans of independent films or true crime dramas are starting to recognize him but after six years in the business, it’s still very new to him.

As a child, he dreamed about acting, but thought it was not in the cards, so he never pursued it.

That was until an advertisement caught his eye.

“I was looking for work actually, and came across this 'extras needed', so I applied,” said McLean. “Within 20 minutes of applying the casting director gave me a call and wanted a head shot, so I sent him one. Then about half an hour later he gave me a time and date to be on set.” 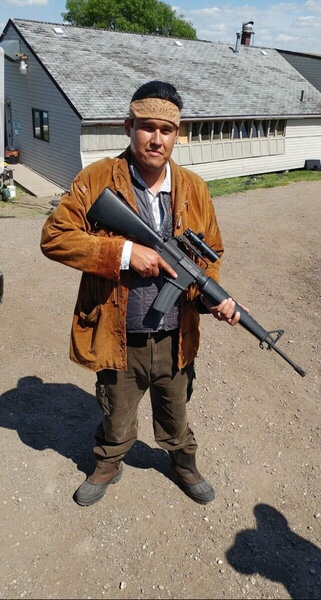 Apollo McLean on the set of Supergrid where he played a bad-ass gardener in a post apocalyptic movie. Photo Supplied

That was when he made his television debut on Season 9 of Truth, Lies and Alibis.

With zero acting experience he showed up on set and “jumped in full force.”

McLean started off as a background actor then moved onto commercials then a web series.

“It was surreal,” McLean said about his first time on set.

That first role as restaurant patron involved sitting at a table, talking to whoever he was paired with and trying not to look at the camera,

Then he appeared in Supergrid, a post-apocalyptic movie that was filmed locally.

“I played a bad-assed gardener,” he said. “Originally, I was just a gardener, then they decided, ‘Let’s give this guy a gun.’ So, I just stood around and started shooting things, pretty much.”

McLean said he really enjoys acting, but for now it is something he does in addition to his regular job as truck driver, husband and father.

He enjoys acting because the film industry is a very tight-knit community and it's good to be a part of it.

McLean will soon appear in another yet-to-be-released film. Not only is it his first speaking role, but in it he plays the bad guy.

He has no agent so the past six years have been a learning experience.

McLean said the biggest lesson he’s learned to date is to always be prepared.

He once landed a speaking part on the Game of Thrones, but was unable to make it because he applied for his passport too late.

McLean remains hopeful he will receive another big opportunity in the near future, but until then he is content with the work he’s been able to do locally.

One day he hopes to get behind the camera and try his hand at directing.