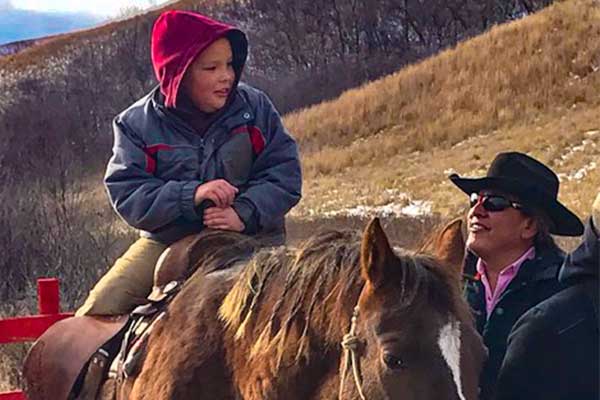 A horse therapy program in the Qu’Appelle Valley helps those who struggle with mental illnesses, trauma and behavioural issues in a six-week program. Photos submitted.


Horses are helping students from Chief Payepot School to cope with emotional issues.

“[My students] had different issues, from behavioural to suicide and all kinds of things. We figured this would be a good program for them,” said learning resource teacher, Gaylene Brady.

“When we first took them out, they were hesitant. By the time the six weeks was up, they were actually on the horses and riding them. Especially the ones with the behavioural . They learned to control their emotions instead of having outbursts because the horses are very receptive to that so the horses would act out. That was a big thing for a lot of them.”

Knowledge Keeper Timothy Haywahe from the Carry The Kettle First Nation has been operating the program for 20 years.

Brady knew her students would benefit after seeing how Haywahe worked so diligently with her students.

“For the students who were shy or closed in, taught them how to use their voices and to bring it out,” she said. “He would empower them and taught them how to work with the horses…he has a knack on knowing what each student needs without me telling him what they need.”

Haywahe created his own horse therapy after he and his family saw other equine services working with Indigenous communities were lacking something vital in their programs.

“They weren’t addressing our core areas of development in the holistic understanding of the medicine wheel,” he said. “We’re not therapists, by any means, but we do understand the horses and the healing powers of the horses. So we intertwined those together.”

Haywahe runs the program with four trained and certified equine facilitators including himself. The program runs for 3-4 hours a day with a lunch included and utilizes the traditional knowledge handed down to them for the program as a way of sharing that with those they serve.

“I like that he uses a traditional aspect. He’s not speaking down on the students, everybody is equal. It doesn’t matter if you are a student, teacher or a volunteer. At the program, everybody has a voice and that’s what I love about it,” said Brady. “I plan on taking ten more students in the spring.”

The TEATAT program can be found on the Takoza Tipi Camp website.