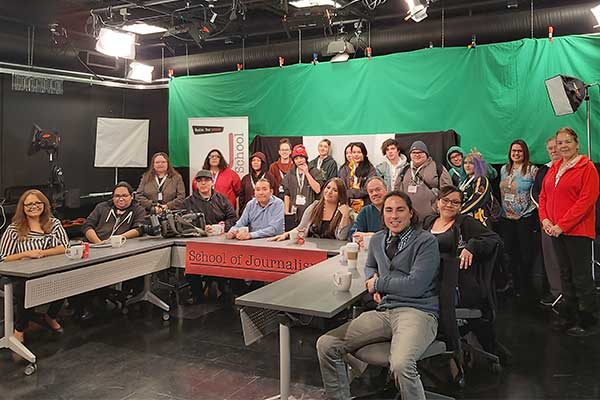 In my new role at the University of Regina’s School of Journalism, my job is like an Indigenous liaison. Currently, I hold the Asper Visiting Chair in Journalism. I will be teaching two classes next semester – one on Advanced Print and the other on Indigenous People & the Press.

I am looking forward to my first teaching experience and to engage the enrolled students on Indigenous news coverage, the protocols that come with it and to educate on the history of Indigenous people in Canada.

On the first week of school back in September, I was asked to do an Indigenous Awareness workshop at the School of Journalism. I did a PowerPoint Presentation on bringing awareness to Indigenous history, identifying stereotypes, negative coverages and how we can honour the Truth and Reconciliation Commission Call to Action #86 by changing how Indigenous stories and issues are covered in the media.

I covered everything from first contact of the settlers, the fur trade, the Indian Act, the treaties, reserve and pass systems, residential schools, Sixties Scoop and other important areas in Indigenous history. I went to speak about the residential school and warned the students that the information they were about to hear will likely be disturbing but opened an invitation for students who wished to debrief.

I didn’t think there would be anyone who would show up but two of them did. They were in shock that such atrocities and injustices happened and continue to happen to Indigenous peoples. I was thanked for providing an essential history in a nutshell presentation. When I was given that gratitude, it confirmed that I was on the right path.

A lot of the Indigenous peoples have a distrust in the media based on what and how stories are covered. I always say to people, “if you want to see a change in how stories are told, get involved.” And some have taken me up on that. I have recruited a handful of Indigenous students to major in journalism – which is great. But more needs to be done.

I decided a great target audience is to recruit them while they’re young. So, I organized an event on November 29th, 2019 geared towards Indigenous high school students. This event took place at the U of R’s School of Journalism. Several local and out of town high schools were interested but we ended up getting less than 20 students from the Peepeekisis First Nation who travelled out for the day.

The event kicked off with a media panel of local Indigenous journalists such as CTV’s Nelson Bird and Creeson Agecoutay, Global’s Stewart Manhas, RezX’s Chris Ross and CBC’s Creeden Martell, Ntawnis Piapot and Penny Smoke. They spoke about the highlights of their career and why they chose journalism. The also explained to the students on why there is a need for more Indigenous journalists.

Little did the participants know I had invited a special guest who was the masked man in the iconic Oka Crisis standoff photo. This was the first time he shared his story and it was an incredible honour to be the first ones to hear it.

Overall, the event was a huge success. Students left feeling inspired and that is what I aimed for. Events and programming like this are a huge need in media programs across the country. In time, we will see changes in journalism. But just like what Senator Murray Sinclair once said, “education is the key to reconciliation…reconciliation is going to take a long time…it’s up to society to step up and take the actions that are needed.”