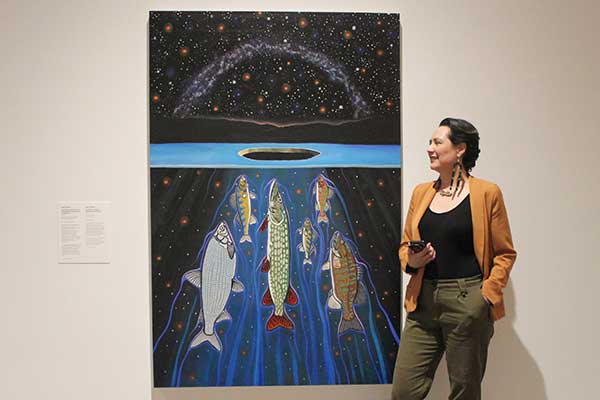 Felicia Gay, curatorial fellow at the Mackenzie Art Gallery, has had an interest in art she was a child and hopes to continue to use it as a commentary to spark social change. Photo by Kaitlynn Nordal

Growing up, Felicia Gay wasn’t exposed to contemporary artists who share her Indigenous background, but she is now seeking to change that for others and impact social change in her role as curator at the MacKenzie Art Gallery in Regina.

“You have to remember at that time I wasn’t necessarily exposed to a lot of Indigenous contemporary artists,” said Gay. “I didn’t feel comfortable going to public galleries. I think a lot of Indigenous people feel that it’s not for me, that’s a place where rich white people go, but in reality, I think most public galleries are changing and shifting that they want these to be more community spaces where lots of different voices come together.”

Felicia Gay, a Swampy Cree woman from Cumberland House, has had an interest in art ever since she was a child.

“I’ve always drawn and written poetry. I did well in art all through high school, but I wouldn’t say I did well enough to become an artist in terms of drawing or painting. In terms of utilizing art as a way to talk about things that didn’t come until adulthood,” said Gay.

Gay realized art could be used as a social commentary while taking art history classes from Ruth Cuthand, a prominent Saskatchewan artist, at the University of Saskatchewan. This is when she knew art was the path for her.

“I started taking more classes,” said Gay. “The professors were aware of how art and decolonizing can work together as a strategy and they brought to our attention many artists who do this type of work.”

Gay was inspired by the artists she was learning about in class such Faye HeavyShield and Rebecca Belmore, who are both prominent First Nations artists.

Gay took her interest in art one step further and started working in art galleries when she was 19. She worked at a small gallery in The Pas, Man., Snelgrove Gallery at the University of Saskatchewan and Tribe Inc. in Saskatoon, among others. At Tribes Inc., working under Laurie Blondeau, she learned more about the contemporary at world. When she opened Red Shift Gallery – her own art gallery, in Saskatoon, which has since closed – Gay learned to be a curator.

Since then, Gay, now in her 40s, has used her influence to help put up installations that deal with social issues. She said she continues to use art to spark social change for one simple reason – it works.

“I think it’s important to me because it’s important for me to make transformative change as a mom. I need to do that for my kids and for my community. It’s in our belief system that when you gain knowledge you have to share it; you’re not supposed to keep it to yourself, you have to keep giving back. If I am going to live my life in a good way, then I have to adhere to that,” said Gay.

John Hampton, director of programs at the MacKenzie Art Gallery, met Gay in 2018 when driving past the Wanuskewin Galleries, where she was working at the time. He stopped in hoping she was at work that day to meet her and compliment her on her work.

“My first impression of Felicia was someone who really has their finger on the pulse of the artist community in the prairies and in Canada and is able to understand what people will connect with to make those links between what artists are doing and what the community is thinking and feeling,” said Hampton.

They have worked together September 2019 and Hampton feels fortunate to work with Gay.

“I think we are lucky as an institution to have Felicia’s voice here because the passion for the social issues she addresses is so personal and very earnest,” said Hampton. “I think the artists that she works with and the audiences can appreciate that it’s coming from that genuine place and that she’s not afraid to speak from a place of lived experience and her own knowledge and position.”

Just like Gay, Hampton feels it’s important that art addresses relevant social issues.
“It is space where you can communicate complex and nuanced situations in a way that allows room for people to insert their own experience and viewpoints. It creates space for people to find new understandings without feeling explicitly preached at,” Hampton said.

“When you see Felicia speak about an artist’s work or about an exhibition that she’s working on, audiences can't help but feel that personal connection because they understand that sense of honesty and that she's coming from a genuine and heart felt place,” he added.

Social change won’t happen without different people in positions of power, according to Gay.

“It’s important for institutions like public galleries to have Indigenous staff in senior positions where they have power and have opportunities to make space in the institution,” she said. “Art is a way for me to have a voice and it always has been, even as a kid. I just didn’t realize it and it’s come to fruition with me being a curator.”