Mawmaw Sachweezin co-host star Alex Pelletier passes away, but his legacy lives on 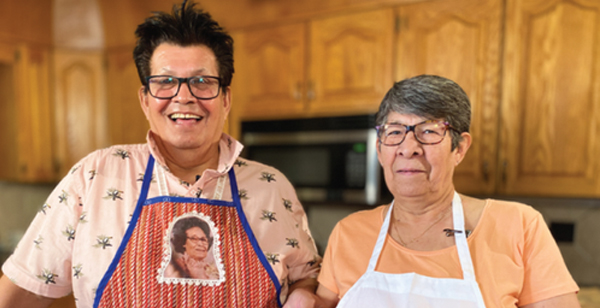 Alex & Beatrice Pelletier holding up neckbone soup during the filming of Mawmaw Sawchweezin Kitchen in Regina earlier this year. Photo BY Shannon Avison

With his contagious laughter Alex Pelletier had the ability to light up a room and would playfully poke fun at his sister Beatrice to get her to talk.

The sibling's fun-loving banter was captured in the Mawmaw Sachweezin podcast.

“‘Beatrice, we’re going to be movie stars!’” Bea said about how Alex convinced her to do the cooking show.

Pikiskwewin.ca unveiled Mawmaw Sachweezin on March 30, which features the Pelletiers using the Michif language while preparing Métis-inspired meals. It is part of a much larger project created to help save Indigenous languages.

Shortly after filming the sixth episode, Alex was diagnosed with pancreatic cancer and after a brief battle, joined his mother in the spirit world.

As of June 2, three episodes of Mawmaw Sachweezin have been released. They are: Pork Hock and White Bean Soup, Bullet Soup and Neckbones and Bannock.

Although the episodes are entirely in the Michif language, the interaction between the siblings is entertaining and educational.

The episodes will be released over the course of the summer and available on pikiskwewin.ca.

Beatrice has many fond memories of her brother, like how he would bring bannock to everyone in the building where she lived.

“He loved to feed people, that's our way,” she said.

Shannon Avison, pîkiskwêwin project supervisor, said Alex was a common presence in every crowd and she admired him from afar.

“He was always saying hello to everyone,” she said.

Avison heard about him going into low-income neighborhoods to feed people. He would prepare meals and hand them out to whoever was hungry.

She approached him about doing the cooking show because she knew he cooked with love and shared his love of people through food.

However, Beatrice was the more fluent speaker, so Alex recruited her, she said.

“It was all so spontaneous,” Avison said about the cooking show.

She recalled how after completing the first episode a smudge was lit and a spirit plate was prepared, which is a common practice in many Indigenous cultures.

Alex not only taught Avison’s son Liam how to smudge, but also what it meant.

“Alex was a great storyteller and a joker,” said Avison.

She described how Alex made Liam's face turn red on multiple occasions when they would joke after they all sat down to eat the food that was prepared.

“Alex had a fun way of teaching, where he would make people laugh at themselves,” she said.

He also made every meal feel so special, said Avison.

The more time spent together creating the show, the more she learned about his family because Alex loved to share stories about them.

He was described by many as a devoted family man who loved life and laughter and who also made every moment count.

In a CTV News video, those who knew him said it was important for Alex to speak his language and he believed the community could revive it.

Mawmaw Sachweezin is available on Spotify, YouTube and on pikiskwewin.ca.