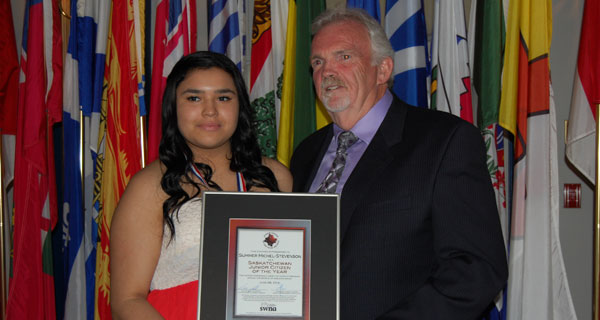 2014 was a big year for Summer Michel-Stevenson. Here she is receiving the Junior Citizen of the Year Award.

Summer Michel Stevenson, from Pelican Narrows First Nation, was voted Newsmaker of the Year with her year of long list of achievements.

When she was informed about the news, she said she felt so happy and surprised.

“It’s like really cool and I didn’t even know I was in it until I seen it on Facebook. I felt honored because there are a lot of other important things that made the news,” says Stevenson.

People were given a chance to vote on different stories that made the news throughout the year from CEO of Neechie Gear, Kendal Netmaker, to Regina hosting the North American Indigenous Games (NAIG) this past summer. Stevenson ranked at 71.52% total of votes through the online website poll.

Back in the spring, Stevenson won the SaskTel Youth Award of Excellence in the leadership category. End of June, she also won the Junior Citizen of the Year Award in Regina. Also, Stevenson played in NAIG and brought home four gold medals and one silver competing in the canoeing sport for Team Saskatchewan. 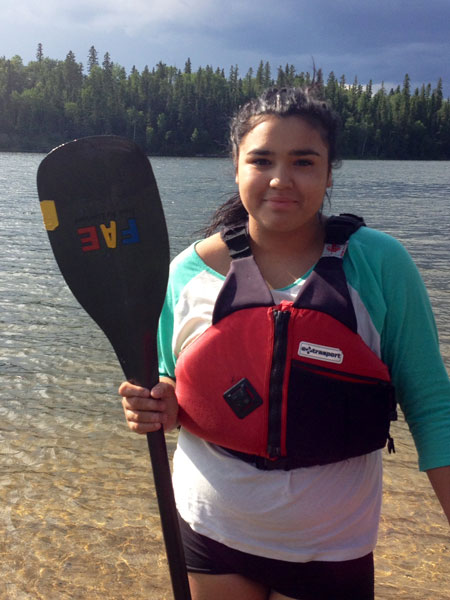 She was also the Junior Chief of the Youth Council on her reserve but retired her position to pursue a university education in Prince Albert with hopes of one day becoming a pediatrician.

She said winning News Maker of the Year Award have made her family and community proud of her achievements including community member Angie Merasty who has known Summer her whole life.

“I was hoping that would happen I’ve been a big fan of Summer’s for many years now. I nominated her for a quite a few awards. There’s a reason behind that, I see someone who’s got potential, she’s very humble when it comes to the praise she gets,” says Merasty. “When I saw Kendal Netmaker on there and the sad story of Marlene Bird and even NAIG those are all great but I’m always such a supporter of our youth,” she added.

“She also won the Northern Role Model Youth Program so she won $1,000 for her community of Pelican Narrows and with that she could put it towards a community event,” says Merasty. “Summer really wanted to start up a SADD Chapter which is Students Against Drinking and Driving.”

So the youth council started a chapter two weeks ago with the help of Stevenson even though she’s not living there, she’s been working with her community distantly.

“Our first event was last Saturday; we hosted a traffic stop with the local R.C.M.P. We were able to do that because of Summer’s award, we were able to buy flashlights, reflective gear and stuff like that,” says Merasty.

Earlier this week, Merasty submitted a report to SADD Saskatchewan for a contest for the Red Ribbon campaign about their recent SADD community event. Later on in the week, she was informed through email their SADD Chapter had won first place for their community event which they won $500 towards their chapter.

The community is reaping the benefits all because of Stevenon’s hard work and continuous dedication to her community and the youth.

Merasty says that Stevenson enjoys singing and that she even made it for the Voices of the North Showcase in February.

Stevenson is a true role model for the youth in her community and she demonstrates that if you want something, work for it. Her words of encouragement for the youth are to always try your best.

“Be who you are and don’t be afraid to be who you are. Just don’t care what other people think because in the end, it’s you not them,” says Stevenson.

Congratulations Summer for being voted Newsmaker of the Year!