Métis Local Presidents have had enough 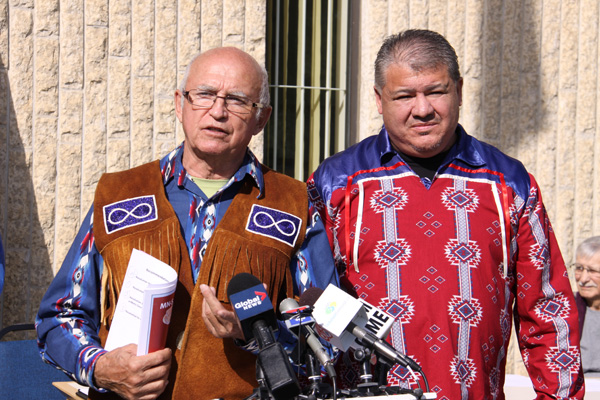 Métis Local Presidents Bryan Lee (left) and Kelvin Roy are calling for a General Assembly in an attempt to move the MNS forward.

Kelvin Roy and Bryan Lee have had it with the Provincial Métis Council and the judges of Saskatchewan. They blame the current political impasse currently bringing down the Métis Nation-Saskatchewan on them and have decided to take matters into their own hands.

“We are here to call for a General Assembly for all Métis citizens on September 26 because our leaders and the courts have failed us,” said Kelvin Roy, President of the Métis Nation of Green Lake at a press conference. “We ask the Métis citizens to come and discuss this issue and decide how to go forward.”

The call for a General Assembly comes out of frustration. In their press release they point to the decisions of Justice Keane and Justice Scherman along with political interference of MP Rob Clarke and the disputed MN-C President Clem Chartier as issues contributing to the organizations free fall. That and the fact the Provincial Métis Council hasn’t had a properly called and run Métis Nation Legislative Assembly in over five years.

Bryan Lee is President of Fish Lake Local and touts four resolutions they would like in action from the General Assembly.

“We need set dates for MNLA’s and Assemblies, we need our own Métis court to handle disputes like this instead of spending thousands in the courts for nothing, we need to accept the Deloitte report on our governance and  we need to go with mail in ballots for the 2016 election in order to be able to afford it.”

Lee and Roy are expressing the anger felt by many Local Presidents who actually should be controlling the governance of the MN-S, governance that has been taken over by the PMC.

“We need to let our citizens decide how to handle this issue,” said Roy, who indicated they had several Local Presidents in support of doing something. “The PMC has violated our constitution so often and look where it has led us.”

MN-S President Robert Doucette welcomes the move by the Presidents.

“This is positive, when the community leaders ask for a meeting with their leaders it is important to be there for them,” said Doucette. “More importantly, act on the direction they give. We were elected to serve the people, let’s honor that principle and move the MNS in a positive direction. We have been talking to AANDC officials and I'm hopeful we will get the funding we need for an MNLA.”

Despite the reassurances of the President, Roy and Lee still intend to bring the people together and try to do something.

“Métis Local presidents, over the course of 5 years now, have been waiting to exercise their democratic rights at a Métis Nation Legislative Assembly, to give direction and set course to the Métis Nation – Saskatchewan,” said Bryan Lee. “We want everyone to come to this Assembly. If there is a willingness of the Métis people, we can do this.”

The Assembly is planned for 1pm, September 26th at CUMFI in Saskatoon.

Letter from Minister Valcourt to the Métis Nation-Saskatchewan

Court orders MNS get down to business

MNS could be going back to court