An apology marks a historical moment and recognition of Métis Veterans.

On September 10th, the Manitoba Metis Federation (MMF) received a long-awaited formal apology to Métis Veterans who served during the Second World War. The apology came part of the unveiling of the Canada-Métis Nation Métis Veterans Recognition Payment Agreement.

“I want to personally thank Prime Minister Justin Trudeau and Minister Lawrence MacAulay for  statement and apology to our Métis Veterans,” said MMF President and Metis National Council Minister Responsible for Veterans, David Chartrand in a media release. “This federal government has shown great leadership taking action to correct the wrongs done to our Métis Nation Veterans who joined Canada’s call to arms only to be met with broken promises upon their return.” 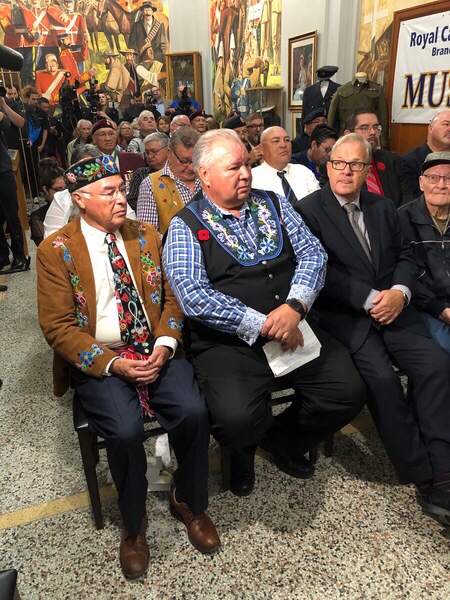 An apology was made to Métis Veterans from the Government of Canada which took place in Regina. Photos courtesy of Manitoba Metis Federation.

The announcement came after nearly three quarters of a century of inaction by other Governments, and years of negotiating acknowledgement and compensation. The apology is also part of Canada’s efforts to fully recognize Métis Veterans’ sacrifices.

“Looking back, it is clear that the pre- and post-Second World War experiences some Métis Veterans faced may have negatively affected their successful re-establishment in civilian life following the Second World War,” said The Honourable Lawrence MacAulay, Minister of Veterans Affairs and Associate Minister of National Defence. “Many experienced , poverty, and a relative lack of pre-war education, vocational skills, and work experiences. We apologize that the benefits offered to Veterans after the war were not well designed to meet Métis Veterans’ specific needs. For example, many Métis Veterans did not possess the required pre-requisites to access education and training.”

President Chartrand said the apology is a historic step towards reconciliation.

“Métis Veterans were instrumental in Canada’s Second World War efforts,” he said. “By acknowledging their efforts and apologizing for not doing this sooner, shows this Prime Minister and government are serious about righting past wrongs. For that, I am grateful.” 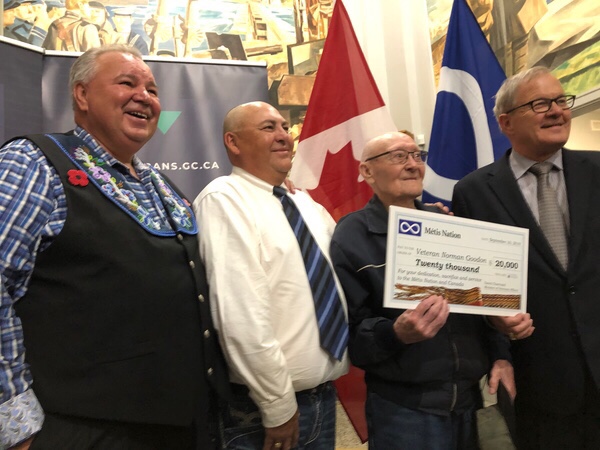 An apology was made to Métis Veterans from the Government of Canada which took place in Regina. Photos courtesy of Manitoba Metis Federation.

Along with celebrating the apology announcement, Chartrand is searching for surviving Métis Veterans of the Second World War. He has and will continue to travel to their homes and communities to thank them in person and to present them with compensation cheques as part of this agreement. The apology took place in Regina.