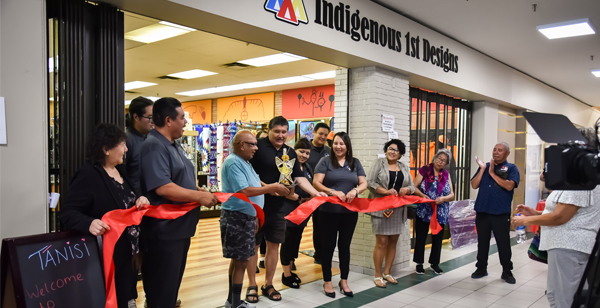 Mindy Kaling once said “If you don’t see a clear path for what you want, sometimes you have to make it yourself,” and that’s exactly what Andrea Custer H. Clarke and her partner Randy Clarke did opening Indigenous 1st Designs.

“kistapinānihk, or as it is known in English, Prince Albert, did not have a store that was designed for our needs and wants specifically,” said H. Clarke. “I always think of the things I want to see but they’re not available anywhere, so we made a place for that.”

The idea to open Indigenous 1st Designs started as a way to share culture and educate.

“There were no stores that served the needs of First Nations peoples and a place for people from all walks of life to go in and see authentic Indigenous items,” said H. Clarke. “People love our culture and have a desire to not only support but learn directly from us.”

“We wanted to showcase how proud we are of our history, culture, and language while also supporting other businesses, both Indigenous and non-Indigenous,” continued H. Clarke.

Regardless of if someone is shopping for something a little more traditional or modern, there is something for everyone.

“Indigenous people are still firmly grounded in their identities, and this comes through in the products we sell, which range from the traditional arts to more modern styles of expression such as the moccasins, clothing, paintings, blankets, and carvings,” said H. Clarke.

The pair are excited to be able to provide another creative outlet for people.

“Indigenous people are some of the most creative people out there and now they have an outlet that is 100 per cent First Nations owned that they can gain recognition from,” said H. Clarke. “It’s also a reminder to everyone that we are not static; we grow with the times yet remain connected to our identities. It’s beautiful to be able to share this.”

The Grand Opening was held on August 19, at the South Hill Mall starting with Elder Leonard Ermine smudging the store while he said a prayer before officially opening and letting everyone in.

One of the most interesting things in Indigenous 1st Designs is the “wahkōtowin” cups that H. Clarke did in collaboration with a First Nations University student Natasha Wolfe.

“These cups are unique. Not only do they include a pronunciation guide but there’s a QR code you can scan, which will take you to a Cree lesson,” said H. Clarke.

The idea to add a pronunciation guide for the mugs came to her after someone commented to H. Clarke they adored the signs she was making but did not know how to properly pronounce the words.

“A QR code was what came to mind because I could link those to anything. I didn’t want to create YouTube videos because they’d be too long, so TikTok was the perfect avenue for mini Cree Lessons and they’d be more accessible to the wider public,” said H. Clarke.

As she jokingly says, this is the educator in her coming out and wanting to have something more than just a coffee mug.

“In those videos, I incorporated some of the things I wanted to get across including proper use of the terms, a pronunciation guide, and how to spell the words in SRO (Standard Roman Orthography) properly. On social media I sometimes see people misusing the terms and I wanted to be able to help teach them properly,” said H. Clarke.