No challenge too great to stop Kkaikka from achieving education goal 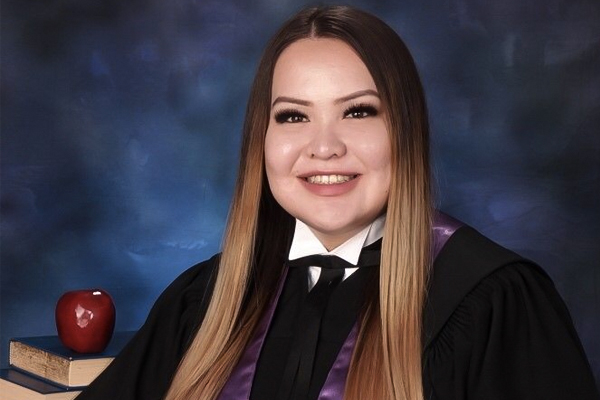 Cynthia Kkaikka is graduating from her teaching degree with distinction and wishes to add more Indigenous content to school curriculums.

Kkaikka, from Hatchet Lake Dene Nation, moved to La Ronge when she was 10. She recently graduated from Northlands College there.

Kkaikka dropped out of high school in grade 11 when she was 16 because of being bullied for her Dene culture in the mainly Cree community. There was not a lot of knowledge about Dene culture and as a result of the bullying she began to internalize racism.

She became pregnant at 17 and when her son was born, she realized the importance of education. The first year of being a mom was difficult. Kkaikka and her mother lived with various family members and while she was grateful for the help, she dreamed of raising her son on her own.

She and her mother eventually got their own home and she went back to high school at age 19.

She was nervous to go back to the same high school, but her new, younger peers were more open-minded and respectful of other cultures and it was a positive experience. Going back opened up a lot of doors for her and she now holds education close to her heart. She earned many awards in high school including the Graduate of the Year from Churchill Community High School.

"No matter the dark times I went through, education always provided hope for me," she said.

Things went smoothly in the first year, when she was enrolled in the Northern Teacher Education Program, (NORTEP) which was affiliated with the University of Saskatchewan.

But in second year, NORTEP was closed and Kkaikka had to relocate to continue her degree. She was accepted to Cumberland College in Melfort but was only able to take electives because they didn’t offer second year Education classes. When Northlands College in La Ronge resumed the Education degree progam affiliated with the U of S, she returned to La Ronge. The disruption caused by the NORTEP closure resulted in Kkaikka having to take extra classes every semester after that to graduate on time.

A month before her third year began, her aunt, who was like a sister, to her died from breast cancer. Kkaikka and her family cared for her aunt in her final months. It was difficult to return to school that year but she carried on. She became pregnant that year. Friends and family doubted she would continue with school, but one week after her son Carson was born, she arranged for family to care for him while she returned to her pre-practicum.

Kkaikka is a fluent in Dene and is passionate about teaching, preserving, and promoting the language and culture. When she is home, she and her mom speak mostly Dene so her sons can learn it.

She created the Dene Language and Culture Club at Pre-Cam Community School in La Ronge, where she taught grade six for her extended practicum. In the club she taught Dene culture and language. She was surprised at how quickly they could use the different Dene sounds and pronunciations.

“Last year 42 students signed up and it was so large I had to split them into two classes.” she said.

She wants to provide Dene culture to her students because there was none when she was in high school.

"I wish to become someone who I needed when I was younger," said Kkaikka. "My goal as an educator is to Indigenize education and teach young students about traditional Indigenous cultures."

Kkaikka maintained an 84 percent average during all four years of university and won many awards. She was the last recipient of the Duncan Bird Memorial Scholarship from NORTEP before the program closed. She earned an Indspire Scholarship, the Prince Albert Grand Council Women's Commission Scholarship, the Saskatchewan Government and General Employees' Union Aboriginal Scholarship, and the Northlands College Scholarship Award.

"With education and our cultural knowledge, we have so much power," said Kkaikka. "I wish more people knew that ... there are so many opportunities out there and a need for Indigenous teachers, Indigenous nurses, and Indigenous lawyers."