After 10-days of the Gerald Stanley murder trial, the jury of seven women and five men have found Stanley not guilty. The verdict was announced shortly after 7:30pm on Friday evening at the Court of Queen’s Bench in Battleford on February 9, 2018. Gerald Stanley was charged with second-degree murder in the death of Colten Boushie who died in August 2016.

Jade Tootoosis, cousin of Boushie, addressed the media in an emotional response on the not guilty verdict. “There was no justice served here today. We hoped for justice for Colten. However, we did not see it. We did not feel it throughout this entire process,” said Tootoosis. “We will fight for an appeal and answers to all the racism that my family has experienced from the day that Colten was shot until the jury delivered the verdict of not guilty. We will not stop our pursuit for justice.” 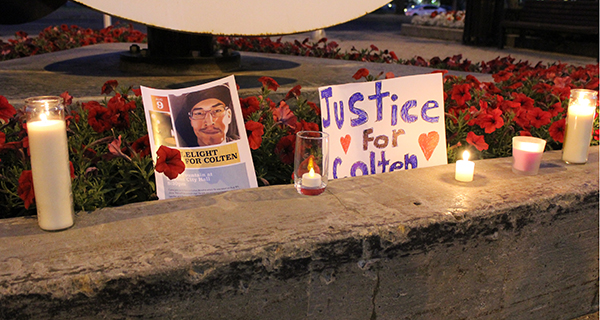 Another Boushie family member responded with great disappoinment outside the court house.

“I guess you can shoot people in the back of the head and get away with it. This ain’t right. This ain’t justice,” he said. “The law system failed my family in this murder trial.”

Chris Murphy, the lawyer representing the Boushie family, said it was one of the greatest honours of his life.

“Imagine if you’re a member of Colten’s family today, reliving the death of your son, brother and nephew and at the same time, truly believing the colour of Colten’s skin contributed to the tragic event of August 9, 2016,” said Murphy. “We will be going to Parliament Hill this month to describe the systemic injustices that this case has revealed.”

FSIN Vice Chief Kim Jonathan was in attendance at the trial. She addressed the media and asks Indigenous people to remain calm and peaceful despite the verdict.

“We are all hurting and we all know what we face with the racism,” said FSIN Vice-Chief Jonathan. “There will be an inquiry, we support that and we will be going to the Hill. We will be speaking as loud and as strong as we can. To all those who are broken right now, please remain peaceful.”

Crown Prosecutor Bill Burge said it was a tough time for everyone including the jury during the Stanley trial. “ role was to present the evidence and we didn’t leave anything out that would have made a difference,” said Burge. “There was nothing more that can be done…the jury made their decision.”

Saskatchewan Premier Scott Moe made a statement on social media on people’s strong reactions regarding to the verdict. “I would urge everyone to be measured in their reaction. Let us all remember our personal responsibility for our thoughts, our actions, and our comments – including those on social media,” said Premier Moe in a Facebook post. “Whether Indigenous communities or non-Indigenous communities, all of us are stronger when we stand together, as our provincial motto ‘Multis e gentibus vires’ states - From many peoples, strength. Let us continue to demonstrate consideration, patience, and understanding for one another as we move forward together in reconciliation.”

It’s a saddening and tragic day for many people after the verdict was revealed – a day that the Boushie family will never forget.

“This has been very difficult but we will continue to seek out justice for Colten,” said Tootoosis.