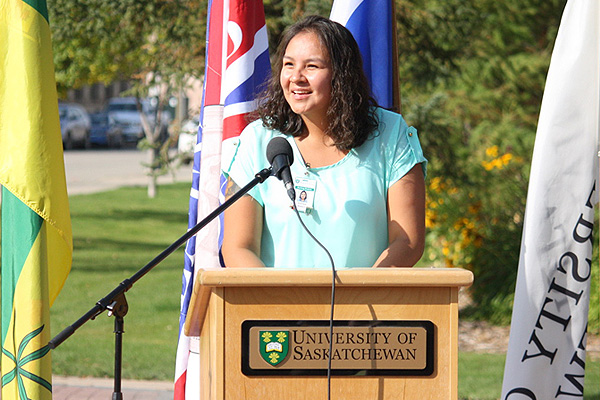 How one arrives in their chosen career can often be the result of a long, winding path of self discoveries and occupational experiments. For Alyshea Watson, her life’s calling was engrained in her from a very early age.

Watson is a fourth-year nursing student at the University of Saskatchewan’s nursing program in Prince Albert. She grew up in Witchekan Lake, about 10 kilometres north of Spiritwood. As a young girl, Watson was in and out of hospitals frequently, suffering from stomach-related issues. But the experience imprinted something positive into her.

“When I was in the hospital when I was younger, I remember the nurses who were looking after me in Spiritwood. I remember two of those nurses being so sweet. When my mom would have to go to work, they would calm me down and carry me around. That compassion they showed me made me want to be a nurse,” said Watson. “That desire to comfort others was instilled in me from a young age.”

Despite Watson being so impacted by the care of others in the hospital, her own journey to become a nurse wasn’t direct. She initially took training to be a medical office assistant in Saskatoon, where she worked for seven years. But while on the waiting list for the nursing program at Saskatchewan Polytechnic, she heard a radio advertisement for the nursing program in Prince Albert. The move north made sense for her.

“I really wanted to go to school and practice in this area,” said Watson. “Going to school in Saskatoon was so intimidating – it’s so big and doesn’t feel like home. So, I was so happy that this program was offered in Prince Albert,” she said.

Watson, now married and proud mother of a young girl, is only a few small steps away from making her career goals a reality. She is passionate about educating and promoting both health and culture.

“I want there to be Cree classes as an elective in our nursing program. Here in the north, there are so many reserves around here with Cree and Dene speaking people,” said Watson. “I think it would be so beneficial for nursing students to learn the basics on how to talk with First Nations patients.”

With the University of Saskatchewan expanding their campus in Prince Albert next year, Watson hopes that it brings about more positive impacts in healthcare for northern communities. Since 2007, the number of nurses working in Saskatchewan has increased by almost 30 percent, with more incentives for nurses to be placed in rural and remote parts of the province. Watson hopes she can contribute to that growth.

“I really want to help First Nations communities,” she said. “I want to go in and work with young populations, do immunizations, and promote healthy lifestyles with them. I’m so excited about the promotion and education side of nursing.”

When it comes to role models, Watson cites her mom and sisters as the hard working, selfless people that she looks up to. She even credits the two nurses who had such influence over her life when she was a child. Watson doesn’t think of herself as a role model yet, but is likely on the way to having a similar impact on many other young people’s lives.

“I am finally working in a community setting that I’m excited about, where I get to educate other people. I’m definitely where I want to be now.”