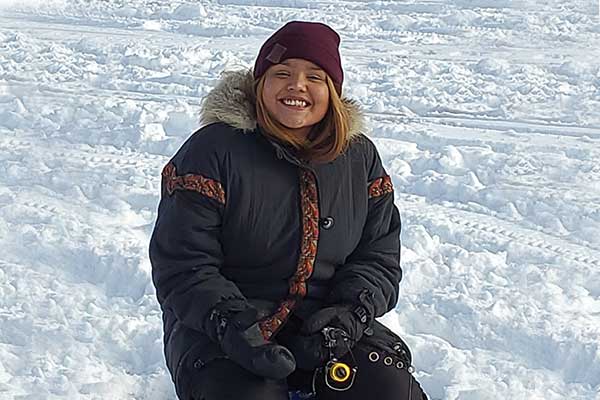 Jessica Sinclair is part of the Office of the Treaty Commissioner's Youth in Service Project.

A Sturgeon Lake First Nation teen made a banner saying, ‘No More Stolen Sisters’ and hung it in front of her house on May 5, the National Day of Awareness for Missing and Murdered Indigenous Women and Girls.

It was a simple act, but for Jessica Sinclair, it was a tangible thing she could do about one of the huge systemic issues facing Indigenous people she learned about over the fall and winter.

“We learned a lot about the Colten Boushie (case) and I’m getting more interested on the issue of the Missing and Murdered Indigenous Women and Girls, racism, the history of Canada, Treaty 6, our Indigenous peoples and our culture and how we came to be today,” she said.

Sinclair is one of 36 Indigenous and non-Indigenous people, 15 to 22, from across Saskatchewan who meet for seven months to learn Indigenous perspectives on history, Treaties, and culture in a project organized by the Office of the Treaty Commissioner (OTC).

“The whole Youth in Service Project (YSP) was designed to engage Indigenous and non-Indigenous youth in reconciliation. That is our overarching goal,” said coordinator Angie Merasty.

The project began with 100 youth at two small conferences in the north and south, from which, 36 were chosen to be part of YSP and organized into an advisory council, speakers bureau, and a “Youth With Youth Cadre.”

Sinclair’s MMIWG banner shows how education and engagement can spark a flame in young people.

“That was all on her. She took that initiative to do the memorial for MMIWG,” Merasty said.

“On (May 5), we asked the (members) if they were doing anything for MMIWG Awareness Day and Jessica did and sent (photos) to us.”

As a member of the speaker's bureau, Sinclair sees her role as helping to bring young people together.

She has ideas for small events that could help others get involved in reconciliation and she’s thinking of studying human rights at university.

“Ever since (this project) started, it changed my perspective a lot. It’s something I want to do now,” she said.

The meetings moved online, via Zoom and Facebook, when the pandemic stopped in-person gatherings.