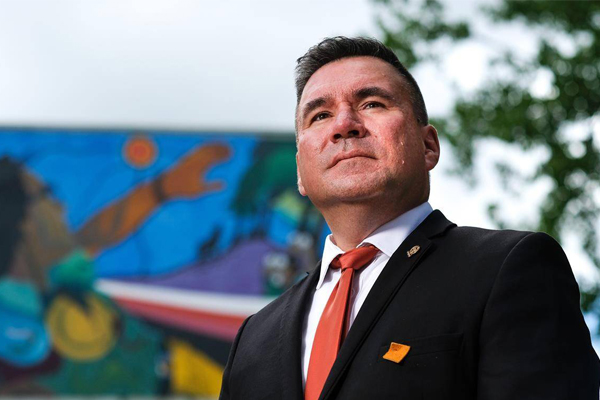 Brad Regehr is the first Indigenous president of the Canadian Bar Association in its 124-yar history. Photo submitted

The first Indigenous lawyer to become president of the Canadian Bar Association (CBA), says his mentor, Senator Murray Sinclair, taught him a lot about the law. And acting.

Brad Regehr, who is a member of the Peter Ballantyne Cree Nation, started his year long tenure with the top job at the 124-year-old organization on September 1.

“I’m humbled that the association had the confidence to elect me,” Regehr said. “I feel honoured.”

“The Canadian Bar Association is lucky to have him,” said Senator Murray Sinclair, one of Regehr’s role models. “He is a very talented and intelligent guy.”

Regehr originally wanted to be a firefighter but said he couldn’t because of his inadequate eyesight. He was inspired to become a lawyer after reading the law school application test booklet while attending the University of Waterloo (UW).

“Law just seemed to be the perfect fit for me,” Regehr said.

Regehr said Sinclair has been one of the most influential people in his life and has taught him a lot about law.

“When you know that something you are doing is affecting someone else, you are more careful and more conscious of the fact that you’re going to have an influence on somebody's life,” Sinclair said. “I’m quite humbled knowing that Brad has been motivated by some of the things that I’ve done.”

They got to know each other over many years when they were both involved in at least eight seasons of the Lawyers Play, an annual fundraising production put on by the Manitoba Bar Association (MBA) and the Royal Manitoba Theatre Centre (RMTC) in Winnipeg.

One of the plays they were both in was Fiddler on the Roof.

“We found it very demanding but energizing,” Sinclair said.

“He’s a better actor than I am,” Regehr said.

Regehr has been practicing law for more than 20 years and has been a partner at Maurice Law in Winnipeg since 2017.

“He does mainly Indigenous law work with Indigneous clients,” Sinclair said. “He has been a very strong advocate for First Nations. He’s advocated for more prosperity and economic activities.”

As president of the CBA, Regehr is now its spokesperson in Canada and internationally. The association represents approximately 36,000 judges, lawyers, notaries, law teachers and students in the country.

“Normally the president would have traveled across the country and to some international locations,” Regehr said. “Member engagement is going to be challenging because of the COVID-19 pandemic.”

One of his main priorities is to advance the work of the association’s Truth and Reconciliation initiative, which promotes Indigenous culture, increases awareness about residential schools and supports anti-racism training.

Regehr was born in Winnipeg and is a Sixties Scoop survivor. He was adopted by a non-Indigenous couple from Alberta. When he was an adult, his adoptive mother helped him find his biological mother Yvonne Bear (later Yvonne Aldcraft).

“I was one of the lucky ones because the family was loving,” Regehr said. “I still do have questions about my identity.”