A historic day in Saskatchewan on Thursday as Prime Minister Justin Trudeau addressed the 2019 Federation of Sovereign Indigenous Nations (FSIN) Spring Assembly in Meadow Lake, following his visit earlier in the day to Poundmaker Cree Nations for the exoneration of Chief Poundmaker. It is the first time in Canadian history that an active Prime Minister met with all 74 First Nations at an FSIN Assembly. 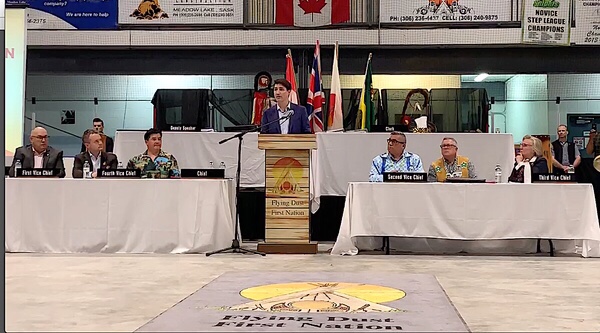 During his address, he restated promises made to Indigenous people during his federal election campaign.

“Ahead of this event, I reflected upon the promise I made during the 2015 campaign. I told you that the time will come for renewed nation to nation relationship with First Nations. A relationship based on the recognition of rights, respect, cooperation, and partnership,” said Trudeau. “I said if elected, our government will take up that work and make it a priority. Nearly four years later, our priorities remain unchanged.”

Trudeau also acknowledged the historic repulse of treaties and injustices to Indigenous people.

“For decades, First Nations haven't been able to count on the federal government to live up to the promises it made, be it treaty or elsewhere, to work with you as partners to support your needs and ambitions,” he said.

“We met with (Indigenous) people who see the problems in their community and have the solutions as well. They just need the support and partnership. We don't need a top-down approach, we need to recognize Indigenous sovereignty and work with Indigenous community leaders and Indigenous communities as equal partners,” said Singh.

“One of the biggest issues people talk to me about is housing. How there's a lack of good housing. In particular, the north needs specific housing that's different from southern housing,” he said. “I also had an opportunity to learn about food sovereignty and the struggles the Indigenous community is facing with respect to being able to live off the land. Access to fish and wildlife – these are vital parts of the way of life and need to be supported and protected.”

The two-day assembly covered a wide scope of issues, including education, housing, economic development, justice, inherent treaty rights, health and social development, and more. During his address, FSIN Chief Bobby Cameron encouraged everyone in attendance to have their voices heard.

“This is your forum to ask questions, to get answers, and to more importantly, to give direction,” he said.

Cameron also talked about the strides the FSIN have been able to make recently on treaty protections for hunting and fishing.

“We were able to uphold and protect one of our most sacred treaty rights, hunting. When the provincial court system found out treaty hunter not guilty within their own system, we went to the Supreme Court and they said forget about it. Treaty trumps provincial law.”

Minister of Indigenous Relations Carolyn Bennett spoke on how treaty understanding need to continue to evolve.

“We've heard that we need to explore together new understandings of treaties that make room for treaties to evolve. We need to make sure treaties are still serving their intended purpose for better, and the treaty rights are actually implemented,” she said.

Seamus O'Regan, Minister of Indigenous Services, also addressed the assembly on a number of issues, including the children in care crisis.

“We all know that the status quo with child and family services doesn't work. Only 7.7% of all children under 15 in Canada are Indigenous, but they make up 52% of children in care,” said O'Regan. “It is utterly and totally unacceptable.”

“We're determined to see First Nations children and youth get access to education that encourages them to stay in school, graduate, and get the skills they need to get the job they want. And that starts with a properly funded education system on reserve,” he said.

O'Regan said that First Nations schools will be given $1,500 per kindergarten student annually for language and cultural programming.

“People need to know that Canada succeeds if Indigenous people succeed,” he said.