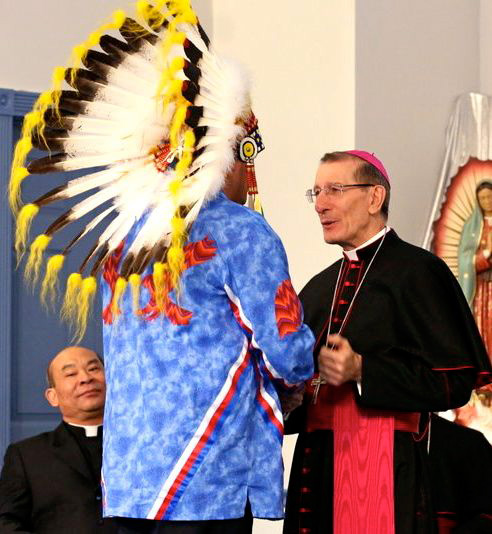 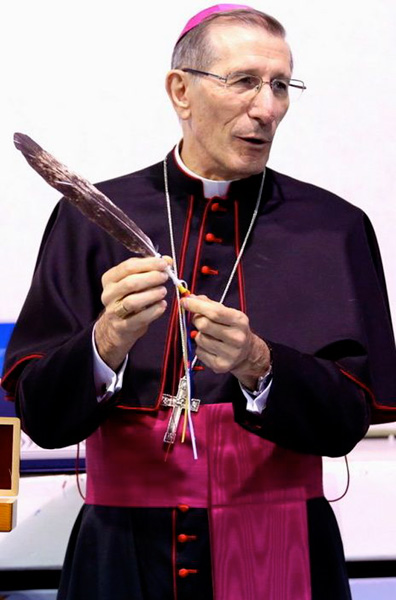 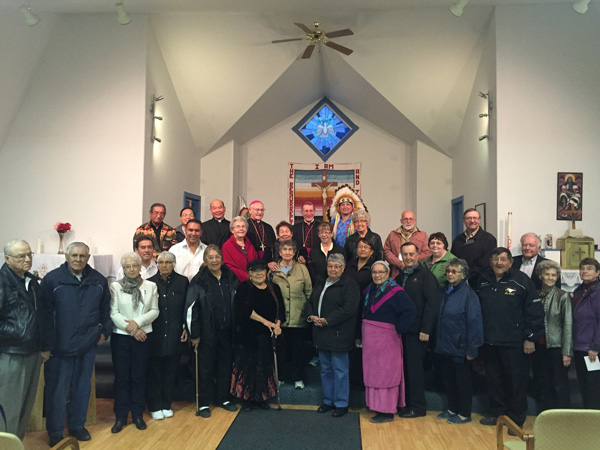 Pope Francis’ top official in Canada was in Saskatchewan for a brief visit in early October, which included a stop on the Muskeg Lake Cree Nation near Prince Albert.

Luigi Bonazzi is the Apostolic Nuncio to Canada or more commonly know as the Holy Roman Catholic Church’s Vatican Ambassador to Canada.

He was appointed to the position by Pope Francis in December 2013.

Presentations were made by elected representatives and elders from Muskeg Lake, Beardy’s and Okemasis, Big River and Sturgeon Lake First Nations followed by a prayer service, which combined a Cree world vision and ceremony with Catholic tradition.

Harry Lafond is one of the parish administrators of the Muskeg Lake Catholic Church.

He says although the Vatican Ambassador had little knowledge about Saskatchewan First Nations’ culture prior to his recent visit to the province, he was certainly eager to learn and was given a good introduction by those present.

This included an explanation of the practice of smudging and he presented Muskeg Lake with a medal from the Vatican.

Lafond says it is certainly no secret relations between the Roman Catholic Church and First Nations people have been strained, particularly by the negative experience many Aboriginal people incurred as the result of attending Indian residential schools.

However, he says it is also time to mend fences and the potential of having Pope Francis visit a few provincial First Nations communities if he came to Canada, could go along way in achieving this.

“Another objective here was to deliver a message to the Vatican through the Nuncio that there needed to be some direct dialogue occurring between the Indigenous peoples of Canada and the Vatican,” Lafond says. “And maybe the best way to do that would be for Pope Francis to pay a visit to Saskatchewan.”

Although Lafond says the long and fractured relationship between Indigenous people and the Catholic Church will not be easy to repair, he says there have recently been some positive signs.

The new Pope appears to be more liberal on social issues than some of his predecessors and Lafond notes that he recently apologized to Indigenous people in Bolivia for the mistreatment they received at the hands of the Catholic Church under Spanish colonization.

He adds the Catholic Church is currently not the active presence in Muskeg Lake, and many other Saskatchewan First Nations communities, that it could be.

Muskeg Lake is forced to share a priest with a number of other communities and as a result prayer services are weekly but not on set days.

At this time, it is unknown whether Pope Francis will make a trip Canada in the near future and, if he did, whether Saskatchewan would be on his itinerary.

Regardless, Lafond says whether or not the Pope comes to Canada any time soon, the message needs to be heard and acknowledged at the highest levels of the Church of past wrongdoings and the need to actively mend relations with First Nations people.

“The message we tried to bring across from our community is: ‘we know the story, we want to make sure you know the story. You need to do what you need to do in your area to promote reconciliation and if it means that the Pope has to come to Canada and acknowledge the role the Catholic Church played in that process, that’s fine, that’s what we need to do. But the focus has to be on rebuilding relationships.’”