Rallies held across Canada in support of Boushie family 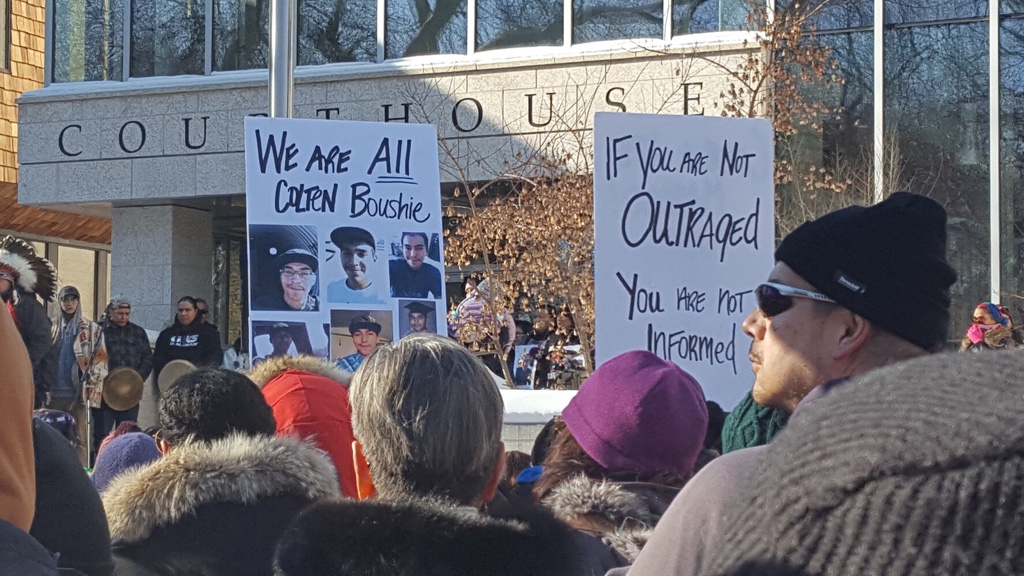 Over 20 gatherings across Canada where people joined in solidarity and support for the Boushie and Baptiste family following the Gerald Stanley not guilty verdict in the death of Colten Boushie. The news sent shockwaves across the nation where people expressed their sadness and frustrations about the verdict that was revealed on the evening of February 9, 2018.

Hundreds of people gathered in front of the Court of Queen’s Bench in Saskatoon to listen to drummers, singers and guest speakers – which included Boushie’s cousin Jade Tootoosis. 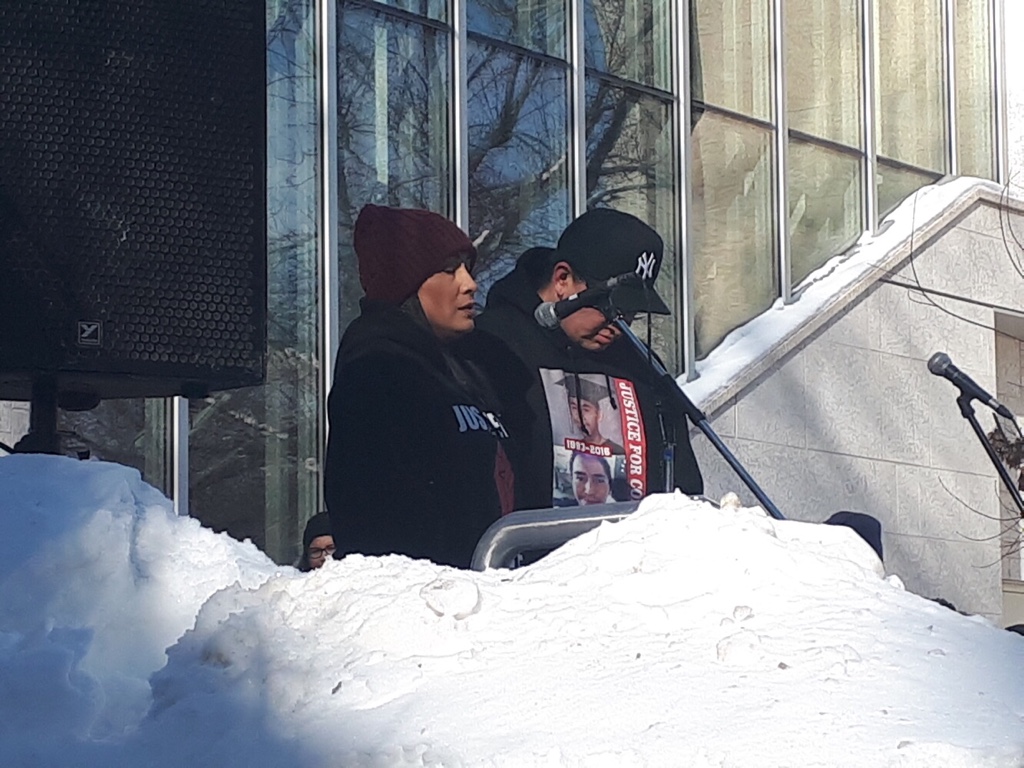 “I’m at a bit of a loss of words past 24-hours has knocked the wind out of me,” she said. “My brother did not deserve this. The past year and a half has been so difficult not only to lose him but to go through a judicial system that is supposed to serve justice for all the people.”

Another large crowd gathered in front of the court house in downtown Regina where people carried signs and stood with heavy hearts to listen to guest speakers.

Walter Red Thunder from Red Pheasant has been by his Boushie family’s side through it all. He addressed the crowd by expressing his disappointment about the verdict through an emotional speech.

“I’m still in shock too…in the back of my mind I knew something like this would happen,” he said. “I ask you all to keep going and help us in this fight in a good way that he won’t be forgotten.”

The event ended with a march downtown and people chanting ‘Justice for Colten’.

On the west coast of Canada, Jerilynn Webster from Vancouver said when she heard last night’s verdict, it enraged her and but did not come as a surprise.

“The Canadian justice system has failed our people over and over again,” said Webster. “Action needs to happen…this type of behaviour is not acceptable. It’s racist towards our Indigenous people.”

Webster has been following the 10-day trial from the West Coast part of Canada and was disappointed that there was no Indigenous representation on the jury.

“That was a missed opportunity to have good relations with justice systems and Indigenous peoples,” she said.

Webster and others organized an event where supporters, 11 guest speakers, drummers and singers met at the CBC headquarters and marched down the busy streets of Vancouver to the court house guided by safety ambassadors. The event ended with a candle light vigil to show their solidarity.

“We send our love and prayers to the family,” she said. “We are there for them, we stand with them with a good heart, mind and spirit.”

Organizers from Yellowknife, NWT held a meeting in their community on Saturday afternoon for a ceremony and a smudge. One of the organizers, Malaw Nakehk’o said they feel the pain and heartbreak from the injustices everyday in Canada towards Indigenous peoples.

“We still live in a society where I have to raise my boys to be cautious to stay together, to be firm and proud in their identity so when they do face ignorance racism it won’t hurt them as much,” said Nakehk’o. “We are hurt, we are angry my prayers to Colten Boushie’s family…we want to gather and share in our grief as a community in solitary with our brothers and sisters across this beautiful land and send our prayers to the Boushie and Baptiste family.”

Across to the east coast, Amanda Rekunyk is gathering supporters at a court house in Halifax, Nova Scotia where guest speakers will lead the candle light vigil into prayers and a moment of silence as they think about the Boushie and Baptiste family.

“We as a community of Indigenous people and allies need to show Colten’s family we support them. We as a community and society need to demand a retrial and justice be served,” she said. “Gathering together is one way to show our support. It is also a healing space for us to come together in prayer and ceremony and grieve and hold each other.”

In downtown North Bay, Ontario, city residents and folks from Nipissing First Nation will also be hosting a candlelight vigil on Saturday evening to show support for the Boushie family.

“This verdict has shaken us all to the core…we needed to come together in this time to show our solidarity with Colten’s family and also to support each other during this time,” said organizer Aylan Couchie. “There is strength in numbers and sometimes coming together can be helpful and somewhat healing. This was what drove myself, and the Chief of my community, Scott McLeod, to initiate this vigil.”

Jacqueline Pelland will be making a prayer event and vigil at Victoria Park in Kitchener, Ontario on Sunday morning from 10am-12pm.

“It’s going to be a space where people can come together and find solace in each other,” said Pelland. “[We will] be coming together in mourning in a peaceful way.”

On Sunday, February 11th, the Prince Albert Grand Council (PAGC) will hold a rally at the Saskatchewan Court of the Queen’s Bench starting at 4 pm, followed by a supper and a candlelight vigil at the Senator Allan Bird gym.

“We are devastated by the decision and we support an appeal and a closer assessment of the judicial process,” said PAGC Grand Chief Brian Hardlotte in a media release. “This verdict represents another test of what ‘Truth and Reconciliation’ truly means.”

The peaceful demonstrations are expected to continue throughout the next few days across Canada and even as far as Florida.