Following the not guilty verdict for Raymond Cormier, who was on trial for second-degree murder in the death of 15-year-old Tina Fontaine, rallies and gatherings were held across Canada to show support for the family of the Manitoba teen was who killed in 2014. 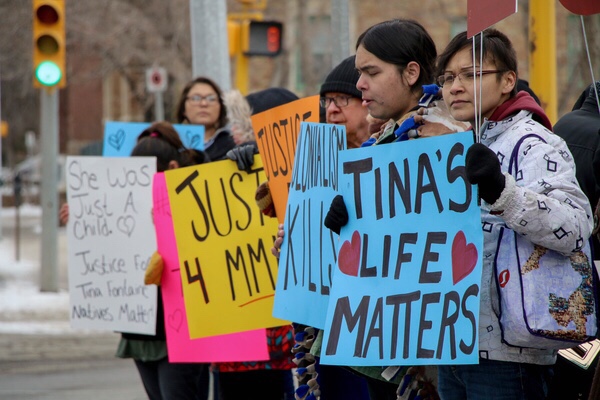 People gathered on a busy intersection in downtown Regina with a round dance which temporarily halted traffic. The gathering was in support of 15-year-old Tina Fontaine who was murdered in August 2014. Photo credit: Evie Ruddy

Regina organizers held a community gathering and a round dance on Saturday afternoon, February 24th. People gathered in front of the Queen’s Bench Courthouse on Victoria Avenue where community members from various political and grassroots organizations came together and arranged a gathering of speakers. Following the speakers, participants stopped traffic for a short time on Albert Street and Victoria Avenue with a round dance as the smell of smudge, the drumming echoes and chants of ‘Justice for Tina’ filled the air.

“The Indigenous community is still fresh off the shock that came with the Stanley verdict,” said community organizer Nickita Longman in a media release. “Our people haven't processed or healed from what that means, and just yesterday, we are faced with another let down from the justice system.”

The community call to action encouraged people from all backgrounds to come together and address real concerns about the second-degree murder acquittal of Cormier for the death of Fontaine.

“We gather in solidarity to remind the people in our city, in our province, and in our country that Indigenous people, along with our allies, are watching and will ensure changes are made within the current colonial justice system,” said community leader and advocate Chasity Delorme. “Until true reconciliation happens in this country, this movement will only get larger, stronger and more powerful.”

The group hopes to draw attention to the various components that have contributed to the death of Tina Fontaine, including the Child Welfare System, the justice system, and the epidemic of Missing and Murdered Indigenous Women and Girls. 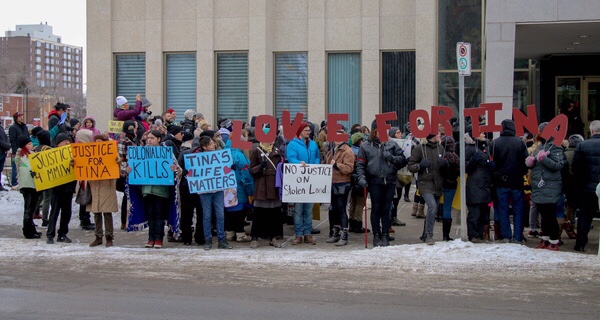 Grassroot organizers held a gathering and a round dance to honour the life and support the family of Tina Fontaine following the not guilty verdict of Raymond Cormier who was charged for second-degree murder in the death of the 15-year-old Indigenous teen. Photo credit: Evie Ruddy

“Tina Fontaine’s story will be told for generations to come,” said Jaqueline Anaquod with Sisters in Spirit. “Canada shows us time and time again, that Indigenous people do not matter.”

The group organizing the event hopes to offer a place of understanding, to ignite change, and most importantly, to support Tina Fontaine and all Missing and Murdered Indigenous Women and Girls across Turtle Island.