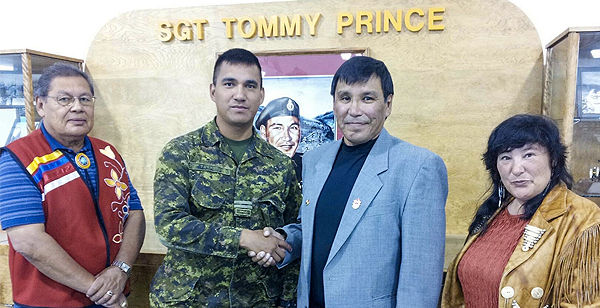 Chief Evan Taypotat of Kahkewistahaw First Nation credits the Army and its Bold Eagle program for instilling in him leadership skills that still serve him and, by extension, his community, today.

As a teenager doing the seven-week Bold Eagle training camp in Wainwright, Alberta in 1998, Taypotat was inspired by the leadership of his Platoon Commander and dreamed of taking that role too.

“He was the kind of guy you want on your side if there was an actual war… He was a quiet leader but he was ferocious… He did everything he needed to motivate us everyday… and he led by example,” Taypotat said.

“I’m 41 today and that was my defining fork in the road that pointed me down that leadership road,” he said.

Taypotat became a teacher but left to join the army full time in 2007, where he trained as an officer. In 2008 he fulfilled his dream of becoming the Platoon Commander at Bold Eagle.

The next year he became an infantry officer and spent another three years with the regular forces, where he attained the rank of Captain and did a tour of duty in Afghanistan before returning home. There, he became the school principal while doing his Masters degree in Education Administration.

Throughout his career, Taypotat has drawn upon leadership skills he learned in the army. Sometimes that has meant telling people what they need to hear, not what they want to hear, he said.

“You have to revert to what’s right, what is ethical, what is moral,” he said.

He was in such a position when COVID hit in March, just as the First Nation was gearing up for its May election.

Many people were alarmed at the prospect of Kahkewistahaw being without its leaders for 30 days before the election and during the pandemic. Some urged him to postpone the election and extend his term for a year.

“We couldn’t do that as a council because can you imagine if we can just extend our terms on our own and we extend it for infinity? I (could) be chief until the day I die. You can’t do that. That’s not a democratic society.”

He and the council stuck to the rules and placed band operations in the hands of program managers during the election period. The membership kept their trust in the Chief and Council, who were all returned by acclamation.

“That’s an example of leadership, because a lot of people can cave in to peer pressure and social media pressure but you have to stand for what is right and what is better for our people in the long run,” he said.

Lieutenant Colonel Tony Engelberts, Deputy Brigade Commander for the region that includes Saskatchewan, said Bold Eagle includes a week of Indigenous culture besides the physical, emotional and mental challenges of the military training. People get to know themselves and learn resilience and leadership.

“Any community with strong leadership can succeed... We can help identify and bring along leaders,” he said.