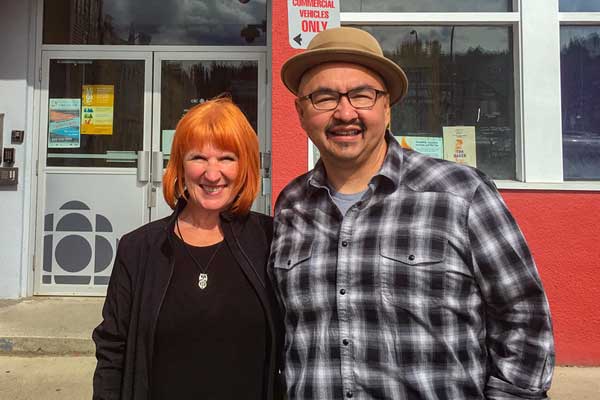 Shannon Avison has enthusiastically pointed hundreds of Indigenous students toward journalism in the 31 years she has headed the Indigenous Communications Arts program (INCA) at First Nations University.

“INCA has become one of the principle institutions to turn out Indigenous journalists,” said veteran Cree journalist and filmmaker Doug Cuthand. “To get a real First Nations perspective, I’d venture to say probably the best place in Canada right now is INCA. It’s showing itself, as some of our graduates go across the country and get high profile jobs.”

“It’s Shannon’s commitment, there’s no doubt about it. She’s dedicated her life’s work to this project, the INCA program,” Cuthand said.

Avison loves her job and credits the university with supporting the INCA program and her work.

Avison was a northerner before she came to FNUniv. She lived with her family in Whitehorse for five years through her teens and had classmates from around the north.

Her family returned to Regina, where she took a degree in Philosophy and became friends with students she tutored from Saskatchewan Indian Federated College, as FNUniv was then called.

In 1985, an SIFC friend told her about INCA, which was then only in its third year. She completed the two-year certificate program and then, as a freelancer, found there was a demand for journalists who could knowledgably cover Indigenous issues. She decided in 1989 to take a degree in Indian studies to improve her reporting. That brought her to the attention of department head Blair Stonechild and SIFC President Oliver Brass, who were looking for someone to teach INCA courses. She was hired as a lecturer while working on her Indian Studies program at SIFC, where many classmates were mature students.

“I wasn’t learning from white scholars, I was learning from First Nations people, living and socializing and dating and partying within the community,” Avison says. “I was really getting (my knowledge) from a First Nations perspective and…  hearing about how policies were effecting my colleagues, my students, on the ground.”

The 1989 federal cap on post-secondary funding led to student demonstrations and a sit-in at the Indian Affairs office. Avison was a stalwart supporter, ferrying students downtown from campus in her orange Volkswagen van, helping make signs and advising students on media communications.

Avison took a two-year break when her son, Liam, was born and moved to Montreal to do a Masters degree in Media Studies, focusing on the role of Aboriginal newspapers in Canada. Through that, she became involved with the National Aboriginal Communications Society, where she met Indigenous journalists from across the country.

Back at INCA, in the early 1990s Avison helped make changes that established the two-year INCA certificate program as a prerequisite to the University of Regina School of Journalism.

She then led creation of the INCA Summer Institute, a seven-week crash course in journalism that touches on print, photojournalism, radio, television and, more recently, blogging and social media. This year students had an introduction to virtual reality video production.

In its early years, the summer institute was held in the journalism school’s facilities and engaged its professors as instructors, “so the students got to know some of the professors and it made the place seem more accessible,” Avison said. “I think that’s why we had so much success over there.”

Another important addition to INCA was an internship that gave students professional experience where they got to know people in the media.

“When they got to first year journalism they were miles ahead… they were leaders in the school,” she said.

In 2005, Avison introduced a strategic communications course, which has evolved into two senior courses. Many INCA alumni have gone into public relations work.

Because many of Avison’s first students were mature students, their children and sometimes their grandchildren have shown up in her classroom, saying their parent or kokum told them to take her course. Others look askance when they see a white woman teaching at FNUniv and are surprised when they discover she knows their relations and often many people from their communities.

Mainstream news organizations are aware of Avison’s wide network. Besides taking her recommendations for promising interns, they often call her seeking suggestions for sources on Indigenous issues.

“I’m nosy. I’m interested. I’m a good resource,” she says, with her signature good humour. “I’m not smart. I just know a lot of people who are smart,” she says.

“She wants them to graduate with a good education, a good experience and also the ability to work… Her enthusiasm is infectious. She speaks from strength. She can prove she’s got the alumni out there that are holding down good jobs at CBC and CTV and other stations all across the country.

“It ain’t bragging if you done it. That’s the way it is with her. She’s done it and she doesn’t have to brag about it,” he said.