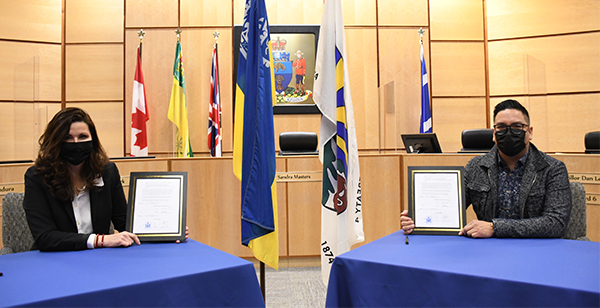 Carry the Kettle Nakoda Nation’s plan to create an urban reserve and development in the northwest area of Regina has received a thumbs up from the Mayor and City Council.

The First Nation’s 20 to 25-year concept plan includes a mix of light industrial, commercial, residential, and cultural developments on 300 acres of vacant land it owns near Armour Road, east of Courtney Street.

Carry the Kettle and the City of Regina committed to a long-term relationship and mutual economic growth when they signed a memorandum of agreement February 11 to work towards a municipal services agreement.

The MOU was unanimously endorsed by City Council but it does not create any binding obligations: it sets out common objectives and guidelines between the two parties to promote economic growth.

“This has been a long time coming. It's something that a lot of former chiefs have wanted to get done,” said Carry the Kettle Chief Brady O'Watch in an interview.

“This is going to benefit people both now and in years to come. As a leader, I want to start something that shows how important it is to have economic reconciliation, to show people that these things can be done.”

“I believe you should aim high. We want to be able to provide something my membership can be proud of,” he said.

O'Watch said hopes the development will smooth the road for people like him, who came to the city from his First Nation and found a series of societal obstacles.

“When you try to work into the economy, you're often faced with so many barriers; there's racism, there's discrimination. Leaving your home reserve and coming to the city, you lose that connection with your family, your elders, your culture,” he said.

“This provides a place people can come home to. Maybe a cultural centre where people can have access to our elders.”

Mayor Sandra Masters said the commercial development will have a huge impact for people in Regina, and that economic independence for Carry the Kettle will create opportunities for jobs and housing.

“I think the mix of those four elements (industrial, commercial, residential, cultural) is ideal. And it's in (line) with our official community plan from the City of Regina's perspective. So there's alignment there in terms of their concept plan,” Masters said.

Masters said the city wants to work with Carry the Kettle to develop whatever vision they have for their nation.

“The opportunity to create neighbourhoods, centres, and employment opportunities that celebrate and promote cultural identity as well as economic independence is the goal,” she said.

“This (signing) feels hopeful, it feels like a piece of good news. Given the last year we've had, and given the history of our province and country, this felt hopeful on multiple levels.”