Reporter Agecoutay does stint in the big cities 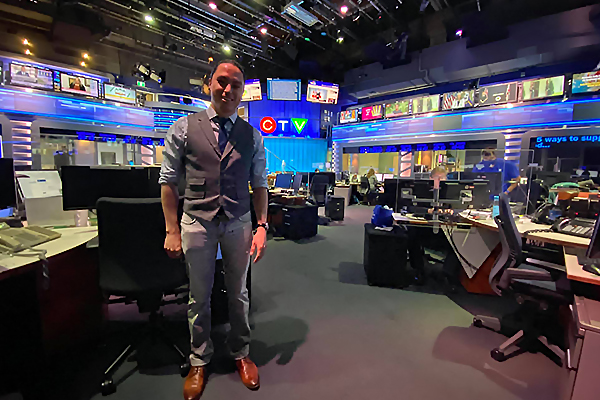 Creeson Agecoutay is with CTV National News in Toronto and Ottawa for two weeks. Photo supplied

After 12 years with CTV Regina, Creeson Agecoutay was tapped for a two-week stint in Toronto and Ottawa with CTV National News.

“It's like a dream come true. It's something. I never thought that was going to happen for me, to get this opportunity.” Agecoutay said.

Nearing the end of the two weeks, he said the difference between Saskatchewan cities and Toronto are like night and day.

“You really have to be strategic when working out here, you can’t be like Regina or Saskatoon where it takes fifteen minutes to get anywhere,” he said.

Agecoutay said it gets lonely being out there and not knowing anyone, but he cherishes each day because it is a wonderful opportunity.

“We need more Indigenous reporters nationally… for voices to be here at the national stage but also for younger generations to look up to,” he said.

Agecoutay graduated from the University of Regina School of Journalism in 2013.

“I was filing stories in Saskatoon every once in a while, and in Regina,” Agecoutay said.

“And over the years, I kind of caught the attention of the national news desk in Toronto…I caught their eye and (in August) I got an email.”

The short term assignment opens the possibility of a permanent position in the future.

When he was a student at the Indigenous Communication Arts (INCA) program at First Nations University of Canada, Agecoutay was trained by (now) CTV News Editor Nelson Bird and cameraman Gareth Ellison.

After he finished university and was hired at CTV Regina, Bird assigned him to host Indigenous Circle while reporting. Bird has mentored Agecoutay throughout his time at CTV Regina.

“I was so ecstatic, and I was almost brought to tears because we worked so hard on sharing, telling, and making the issues of indigenous people,” Bird said.

Bird said he and Creeson worked hard to bring the stories of Indigenous people to light, and after being with CTV for 22 years he believes this was the step in the right direction for Indigenous people across the country.

“His success is our success,” Bird said.

“You can tell by the comments that the reaction from people all over the place…it’s time it’s needed with CTV.”

Bird and Agecoutay texted each other regularly during his big city gig.

Agecoutay said he is there to inspire younger generations and show them their goals are attainable and they can follow their dreams.

“Work hard, do things that scare you because in the end you'll come out a better and stronger journalism student,” Agecoutay said.

“I was scared when I was an INCA student. I was scared to even pick up a microphone and talk to somebody. I was shaking.”

Agecoutay mentors INCA and journalism students throughout his busy days in Regina and continues to do so while he is in Toronto.

“It's kind of like I have to pinch myself here. I'm going out East and I'm going to be in the same room with all these people I grew up watching.” Agecoutay said.