Podcast Available:
Click here to listen to the audio version of this story 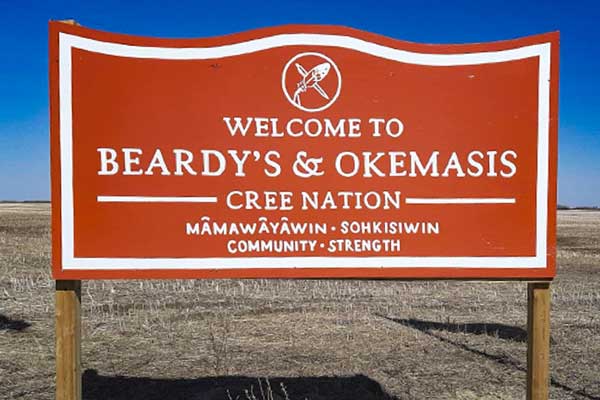 Tension arose when RCMP went to a Sun Dance ceremony held on Beardy’s and Okemasis Cree Nation on May 10.

The two officers were following up on two complaints May 8 to the provincial COVID-19 reporting system about the gathering.

Lodge keeper Clayton Sutherland told Eagle Feather News in an email that Chief Edwin Ananas had notified him about the complaints and that Ananas did not have a problem with the Sundance as strict safety and health protocol requirements were followed during the ceremony including temperature checks and social distancing.

Sutherland said FNIHB had directed the Chief to go to the Sundance and persuade the attendees to disband the ceremony.

“Our leadership is very frustrated with how these complaints were made and handled without the knowledge or contact of community leadership,” Chief Ananas said in a press release.

“We are also frustrated with the simple fact that there are more people at a Walmart at any given time than there is at a Sun Dance, but you don’t see police going in to break up those mass gatherings, so why are First Nations spiritual and healing ceremonies being targeted?”

“Our knowledge keepers know how to use our traditional medicines from the land to heal our people and have been conducting these ceremonies and traditional healing practices for centuries. Our ceremonies have lived through past pandemics and will continue on through this one as well,” said FSIN Chief Bobby Cameron.

Andre Bear, a law student at the University of Saskatchewan, who attended the ceremony, described the RCMP presence at the ceremony as ‘intimidating.'

Bear said officers walked towards the ceremonial lodge with their weapons in their holsters and were stopped after the lodge chief and participants yelled at them not to bring weapons near the lodge.

“If they had their guns on them… they were not welcomed in the healing ceremony,” Bear said.

“If there is a need or a good reason for RCMP to approach a lodge like that they need permission from the lodge chief and they need to be unarmed,” he said.

Sutherland said the Sun Dance was held to combat COVID-19. It was also held to carry out a vision had by an Indigenous medicine man to hold the ceremony to fight the virus.

First Nations and Inuit Health Branch (FNIHB) “feel they have the power over certain people and environments. Those power dynamics are uncalled for in our Sovereign Territory and for them to interfere in our ceremonies,” Sutherland said the email.

“We have a right to practice our cultural ways and they must respect our ceremonies. FNIHB does not have cultural policies or protocols concerning Indigenous rights to the ceremonies we practice. They should be supporting the lodge keepers and our pipe stem holders/ceremonial leaders rather than taking a negative approach.”

Bear says while public health orders are important, they do not trump constitutional law that protects the practice of traditional ceremonies under section 35 of the Constitution.

He added that First Nations ceremonies need to be recognized as traditional Indigenous Health Care Systems and says that unfortunately only modern-day mainstream health care systems are recognized as valid.

“That’s what needs to be realized, not only for Canadians but for Indigenous people,” said Bear. “They need to recognize and realize that ceremonies are just as essential and just as needed as the hospitals that carry sick people and try to heal them. That’s the gravity, severity, and seriousness of our ceremonies and how important they are and how important it is that our ancestors died to keep them alive today.”

The RCMP went to the gathering twice on May 10 and left both times after speaking to an organizer and no charges were laid, RCMP spokesperson Cpl Rob King said in an email to Eagle Feather News.

The RCMP is committed to following up on reports of public gatherings that may contravene the public health order, King said.

At no time did RCMP officers ask for the ceremony to stop, he said. “These are challenging times and we understand the need to gather with those we care about is strong, especially when we would normally be participating in community, family, and traditional celebrations. The Saskatchewan RCMP is committed to doing our part to ensure our communities are healthy and safe.” King said.