“We are bringing awareness on the Missing and Murdered Indigenous...and all people that are behind what’s going on right now and involved with bringing awareness, in a different way, with bringing creatives together,” said Oro, adding that everyone involved was directly impacted in one way or another by the issue of Murdered and Missing Indigenous Peoples (MMIP). “Either they have a loved one that’s missing, or has been murdered, and all of them have their own stories, so it’s very personal for them.” 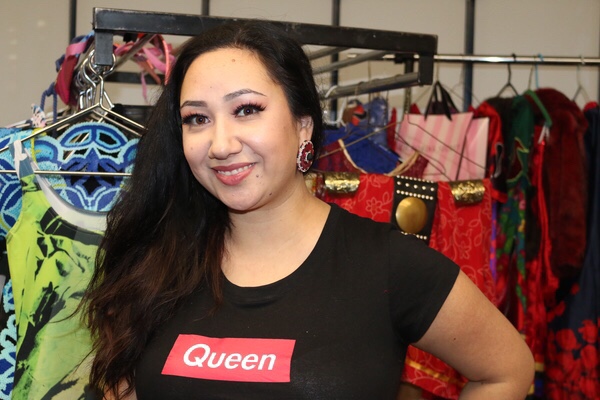 They are raising funds for Saskatoon organizations that are helping women leave tough situations or supporting the families of MMIWG2S/MMIP, with everyone donating their time and talents. Volunteer and advocate Rachel Fiddler helped obtain the Gordon Oakes Red Bear Centre as a venue.

“We are literally doing this without any sponsors or budget, so it’s a community of people contributing their time and creativity and talents to bring a really wonderful night of fashion, performances, and impactful speakers,” said Oro. “It’s not your typical fashion show, it’s really storytelling in a creative way, in a way that we express our own feelings and tell our stories, as well as creating a platform for local Indigenous talent.”

For some designers it was their first time.

“I just like coming to fashion shows because I love sewing, I love creating different things,” said Hawk Caribou, who showcased her new work and is known for her medicine salves, her clothing, and her creativity. “It helps me with my healing journey, keeps me busy, living a healthy lifestyle. I love working around other women and youth that are seeking to improve their lives, doing productive things for the community.”

Award-winning visual artist Catherine Blackburn said that she’s not typically a clothing designer, preferring jewelry along with her visual art.

“It’s been interesting and really exciting, a super supportive Indigenous fashion community that’s been really refreshing for me, because I spend so much time in my own studio,” said Blackburn, adding the Indigenous community is something special; this is her third show and probably last. “The first show in Toronto for Toronto Indigenous fashion week I came off-stage, and all the designers were in a circle, asking me to join and come in to hug and I broke down in tears, it was just such an honour to be a part of that group and have each other’s back.”

Her work, New Age Warriors, is inspired by her late grandmother who was an amazing bead artist. Blackburn used plastic beads to speak to survival, resilience, and personal experience as an Indigenous woman who did not grow up on the reserve: honouring women and matriarchy through garment working, not women’s only role but one traditional role that deserves to be honoured. Other designers included Faye Thomas with her Red Spirit Woman Designs; Disa Tootoosis; Becki Bitternose; Tala Tootoosis, who also performed; Kyla Sanderson; and special guest from the US, Norma Baker FlyingHorse, who has designed gowns worn at the Oscars.

“It’s a time for them to network and make their own connections, as well…there are a lot of red dresses and red collections, they have meaning to each designer telling their own story through the work,” said Oro. “Some vendors are also contributing part of their sales to our organizations that we are donating to, so all the ticket sales are going to those two organizations as well.”

As well as designers, there were spoken word performances, dancers, singers — something described as a night to empower women.

“All the women showcasing are bosses in their own right, so this night is really just highlighting all the Indigenous boss ladies that we have in our community,” Oro said. “It’s important for us to share our talents with our own home community, a lot of us have travelled all over the world but it’s so nice to do something and raise funds for a good cause.”