Sounds of a howitzer echoed throughout the grounds of the Legislative Building to pay tribute to the recently installed Lieutenant Governor of Saskatchewan, Russ Mirasty – the first Indigenous person in the province to hold the prestigious role. 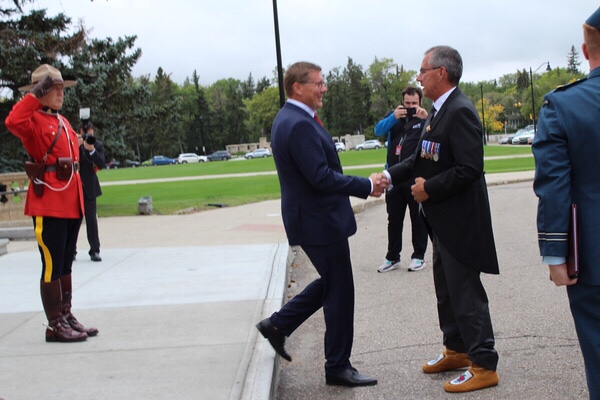 Premier Scott Moe welcomed the newly appointed Lieutenant Governor of Saskatchewan Russ Mirasty and his wife Donna with warm hand shakes on the front steps of the Legislative Building. Photo by Jeanelle Mandes.

The installation ceremony for the 23rd Lieutenant Governor of Saskatchewan took place at the Legislative Building on September 12, 2019 where hundreds of people attended to witness the historic event. Mirasty was sworn in this past July at the Government House in Regina but the installation ceremony was much more meaningful to him to have his family, community, fellow RCMP members and the public witness a historical moment.

“This is much more public…more family and community people involved. It makes it more meaningful although the swearing-in means a lot but having the community coming to support me, [my wife] Donna and the family is fantastic,” he said. “Anybody and everybody can contribute to this great province and country regardless of where you come from and what your background is. That was the message [at the installation ceremony] being able to share something that was personal but also not to dwell on that and to say that we can move forward from those challenges.”

Mirasty briefly shared his experience as being a residential school survivor. A chapter in his life that took some time to share, but he says it’s important for people to understand that others can overcome challenges to still do good things.

“It’s a part of my journey and my experience makes me who I am today in terms of being resilient and the strength that I achieved from that. But appreciating what it’s done to our people and learning from that and finding ways to overcome the challenges and to be able to move forward,” he said. 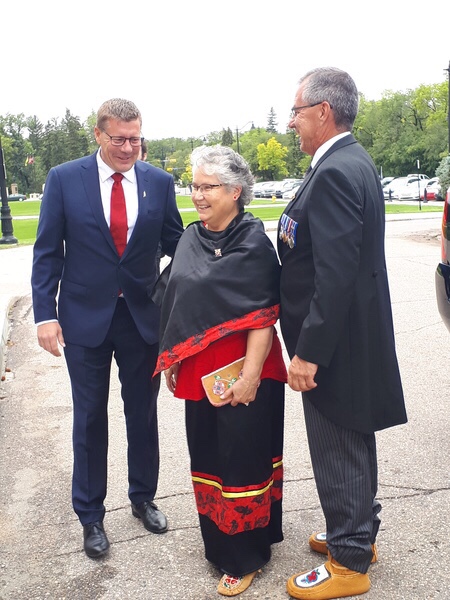 Premier Scott Moe and Lieutenant Governor of Saskatchewan Russ Mirasty shake hands to kick off the installation ceremony of His Honour. Photo by Jeanelle Mandes.

Mirasty addressed everyone in the Chamber in his Cree language, which he felt was important to speak in his Indigenous language.

“Partly because of who I am…and to express that’s who I am,” he said. “I think it’s important in my role to be able to communicate that standard greeting from Her Majesty in my own language. It speaks more deeply about the relationship with the Crown.”

When asked what it’s like to be the first Indigenous Lieutenant Governor of Saskatchewan, he said it’s something that he appreciates more and more everyday.

“I’ve done many different things in my life and achieved different things. Because of the unique relationship between the Crown and Indigenous people, this is much more meaningful,” he said.

He added that he would never think he’d see an Indigenous person holding the position that he currently holds.

“I often wondered why there aren’t more Indigenous people in these roles but it’s a complete surprise for us,” he said. “It just demonstrates the ability to get to a certain point.”

Saskatchewan Premier Scott Moe was in attendance at the installation ceremony. He greeted Mirasty and his wife, Donna, on the front steps of the Legislative Building and guided them inside. Moe said it was an important and a historic day in the province.

“We have appointed the first Indigenous Lieutenant Governor [of Saskatchewan], a man in his own right is most certainly capable and will confidently serve all of the people of this province and serve behalf of the Queen,” said Moe. “Very proud of His Honour, Mr. Mirasty.” 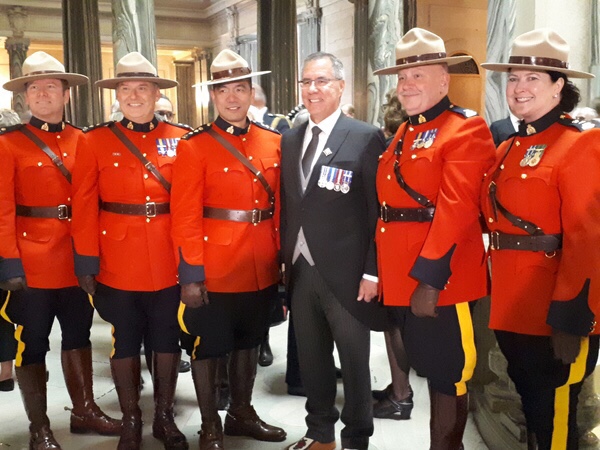 Lieutenant Governor of Saskatchewan Russ Mirasty poses with members of the RCMP – a role he once served. Photo by Jeanelle Mandes.

Following the installation ceremony, an inspection of members of the armed forces and the RCMP was held in front of the Legislative Building by His Honour, Mirasty.

Tears of pride and happiness fell from many eyes on this historic day as AFN National Chief Perry Bellegarde described.

“It a historic day…to see one of our own the highest office in our democracy here in Canada,” said Chief Bellegarde. “Mr. Mirasty has a life of public service and now he’s going to continue to serve all peoples…it’s fitting that on behalf of the Crown that he is there now, to maintain that honour of the Crown and work to build a better province and country together. So, I am very happy as National Chief.”

As Lieutenant Governor, Mirasty is the personal representative of the Queen of Canada in the province, and is responsible for granting Royal Assent to provincial laws, as well as summoning and dissolving the provincial legislature. Under the Canadian Constitution, lieutenant governors are appointed by the federal government for a minimum of five years; however, there is no fixed term of office.