Safe injection sites, also known as supervised consumption sites, provide a safe environment for drug users and aim to prevent infectious disease while connecting clients with education and services. Safe injection site success stories in Canada are not in short supply. A facility in Vancouver, Insite, saw a 35 percent decrease in fatal overdoses in the surrounding area, a 30 percent increase in people getting into detox, and a 96 percent decline in new HIV infections. The total number of deaths due to overdose at the Insite facility, since opening in 2003, is zero. 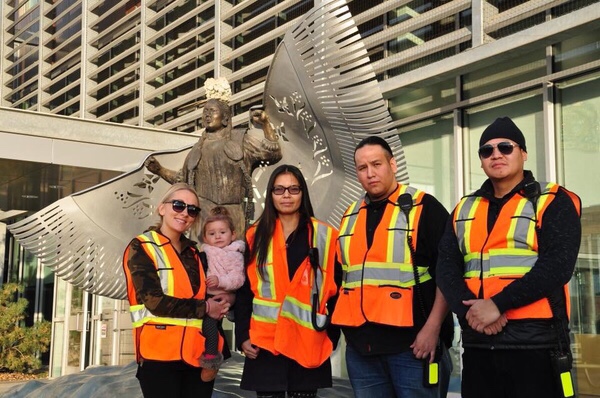 Colin Naytowhow and other members of the Okihtcitawak Patrol Group in Saskatoon.

Despite their proven effectiveness, Saskatchewan still has its skeptics, including Health Minister Jim Reiter, who, in 2018, questioned their application in smaller communities: “I'm not sure that there’s been any examples across the country of safe injection sites in a small town of just a few hundred people.”

“I think its vital to Saskatoon to have a safe injection site so we can connect clients to case managers and workers, to allow them to be monitored while they’re using. Because they’re going to be using regardless,” said Colin Naytowhow.

Naytowhow is the founder and executive director of Okihtcitawak Patrol Group, a harm reduction group that patrols core areas of Saskatoon. Naytowhow estimates that he and his team pick up around 200 discarded needles and sharps per week. During patrols, Naytowhow said he has caught small children playing with spoons that still had drug residue on them.

Saskatchewan has some of the highest HIV rates in the country, with rates more than 10 times the national average in some regions in the province. Nearly 80 percent of those with HIV in Saskatchewan are Indigenous.

“The stigma towards having a safe injection site is that its promoting drugs. But I think its vital for the reduction of disease, overdoses, and infection,” he said. “There needs to be a level of understanding of why that person is using in the first place. A safe injection site could offer programs for trauma related use, which is why a lot of people become addicted.”

Becca Beattie, a Saskatoon woman, started a petition in December for a safe consumption and treatment facility in the city, as well as wrote a public letter to Health Minister Jim Reiter, arguing for support. Beattie started the petition after an incident in which a man tried to shoot up at a table in Subway where Beattie was sitting with her four-year-old son.

“We’ve connected with a lot of people who want to come forward and talk about obstacle and barriers that they face in this system, and how the system has displaced them,” she said. “They’re not just safe injection sites – they’re multifaceted – educating the community on safe practices and making sure they get tested (...) When you connect with vulnerable communities, they help to create the best treatment plan for them.”

Beattie said she eventually received a written response from Minister Reiter, who said the Ministry would first have to investigate drug user patterns.

“Absolutely not (satisfied with Reiter’s response). It's the same dismissive feeling,” said Beattie, who said she lost her mom, a 60s Scoop survivor, to opioid use.

“I think it’s fundamentally because we have a very conservative government. In his letter back to me, he referenced that our needle exchanges have a 91% success rate. People are going back repeatedly. Largely these exchanges have no funding from the Ministry of Health. If he cites something that he doesn’t fund to be 91% successful, why isn’t he funding it?”

In an email response to an interview request, Minister of Rural and Remote Health Greg Ottenbreit said, in part:

To date, Beattie has collected over 3,000 signatures. She hopes the petition will be used as evidence for third parties who seek funding for safe injection facilities from the Ministry of Health. She plans on continuing to petition the public, and government, for support.

“We’ve seen such great success stories with other safe injection sites across Canada, done by third parties, who offer a multitude of services,” said Beattie. “People are going to be doing drugs. I’d rather them be educated and safe.”